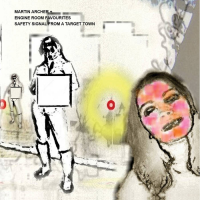 Once again, British multi-reedman Martin Archer leads his large ensemble, Engine Room Favourites, through a myriad of persuasive developments. The band's assertive modus operandi is occasionally sectionalized during various motifs, where minimalist structures, free-form outbursts, structured horns charts and many other factors come into play. Indeed, they pack a mighty wallop coming from all angles on this 76-minute program.

Vibraphonist Corey Mwamba is a colorist via his cool and sleek passages during more conventional modern jazz segments. Yet the ensemble's chameleonic qualities are evidenced on "Perfect Soldier," where big band style choruses are offset with salty spinoffs and violinist Graham Clark's seething solo as the musicians transparently toggle between avant-garde expressionism and progressive jazz formats. At times they launch motifs intimating that an emergency has occurred. Adding some bluesy angst and calamitous exchanges, the band shifts strategy with a budding Latin-jazz groove amid thorny horns and playful discourses on "The Playground In The Desert."

" Happy Birthday Mr. President" is a swashbuckling bop / free bop fest with alternating currents, as the musicians are commemorating a president somewhere on the planet. Moreover, several other thematic buildups on this album are erected with odd-metered arrangements, layered horns, and slowly paced off-centered discourses heard on the final track, "One Minute To Midnight / Beijing Halflife." But leave it to Archer and his upbeat ensemble to foster many divergent pathways and seamlessly converge matters into a dynamic chain of events with a sparkling soundstage and numerous detours.

Safety Signal From A Target Town; Perfect Soldier; The Playground In The Desert; Happy Birthday! Mr. President; One Minute To Midnight / Beijing Halflife.