BY FRIEDRICH KUNZMANN
May 19, 2020
Sign in to view read count 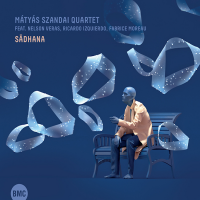 A Frenchman, a Brazilian, a Hungarian and a Cuban meet up in a bar in downtown Paris and start making music together. This is not the beginning of a joke but merely the account of where the quartet around Hungarian double bassist Mátyás Szandai originally formed. A graduate from the Franz Liszt Academy in Budapest, Szandai has been living in Paris since 2011, where he continues to broaden is musical knowledge of classical music, studying composition at the Hector Berlioz conservatory, while working in a teaching position himself and, last but not least, exploring the Parisian jazz scene as a bassist. It is in this environment that Szandai met his sidemen for this quartet recording. Between guitarist Nelson Veras and saxophonist Ricardo Izquierdo's counterpoised interplay and drummer Fabrice Moreau's thick rhythmic tapestry, Szandai not only lays out the binding foundation but furthermore develops upon the intricately wrought bars and meters.

The initial sense of harmoniousness introduced on the opening string section excerpt is merely a tease. Only the little moments of dissonance and syncopation hint at what the remainder of the album is all about. The follow-up, "Nine Pines," gets straight to the point and demonstrates the dense interplay between all melodic voices involved—the bass being among them. Rhythm and meter feels suggested but vague throughout a tense display of the exchanging of ideas and glances. Many of the songs on the record follow this deconstructed notion of different voices searching for one and other, finding each other and then growing apart again. "Azur" features a very clear melodic theme with a more or less straightforward quality, contrasted by the accompanying elements that appear to be pulling and tugging at it. Each step an instrument takes seems deliberate yet decided upon in the moment, giving the set a spontaneous and lively air. But the complex nature of the compositions argues that there's very little spontaneity about it.

Folkloric elements ("Dig the Mood") or shifts towards more minimal instrumentation ("Music from Gyimes") as well as freer exhibitions ("Fearlessness") enhance the already remarkable sense of variety at hand and give the record its approachable allure. Dry production values and the intriguing tone of Veras' amplified acoustic guitar complete this colorful picture. On "Degrees of Freedom" guitar and saxophone prominently present the interwoven nature of their lines, trading unison passages with short solos that seem to undermine the harmonic frame through chromaticism and sidesteps, as if it were but an afterthought. "Down to the Water," on the other hand, sees Veras taking a rare break, leaving the floor for Izquierdo's fluent sax solo to find its way around the changes all on its own. With a mischievous undertone, traditional bop language in the form of a Warne Marsh composition graces the ending of the album like a kind reminder. But that's just "background music" ... Or is it?

Sadhana is an exceptional work of art and presents an engaging set of unique writing and playing. Beyond providing the strong compositional foundations, Szandai has also gathered a group of musicians around him who complement his ideas with aplomb. Here's hoping this won't be the last strike from this group.