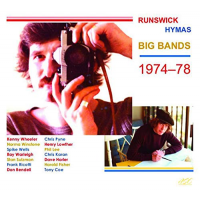 British bassist, composer and conductor Daryl Runswick was born in 1946 and in 2019 is retired. His archival recordings have had something of a renaissance, at least as far as CD releases are concerned. Following in the wake of 2017's double album of previously unreleased tracks entitled Daryl Runswick: The Jazz Years and 2018's live quartet album from 1981 Playdreaming, both on the ASC label, we now have the Runswick Hymas Big Bands. Again comprising never previously released tracks, it's split into two sessions. The first four tracks were recorded on May 22, 1974 at London's Golders Green Hippodrome. The second half, a studio session, is more idiosyncratic in its origins.

Runswick studied for a BA degree in music at Cambridge University and, by the 1970s was a fixture on the London jazz scene as a virtuoso bassist. He notably played bass guitar for two Count Basie and Frank Sinatra concerts at the Royal Festival Hall in May 1970. But he was also a key member of the Cleo Laine and John Dankworth bands for several years, playing double bass and bass guitar and writing well over a dozen songs recorded by Laine. His musical oeuvre was fairly eclectic and aside from jazz, Runswick was also known for performing and composing contemporary classical music and he wrote his fair share of television incidental music too. Runswick and pianist Tony Hymas had toured together in the Dankworth/Laine bands in the early 1970s and consequently decided to form their own big band. They recruited some of the finest jazz musicians in the UK, including Kenny Wheeler, Henry Lowther, Don Rendell, Ray Warleigh and Stan Sulzmann. Although they intended it to be an on-going project, sadly they only played one gig, the one featured here.

The Golders Green session opens with Hymas' elegant "When The Bough Breaks" with a typically mellifluous solo from Lowther followed by Sulzmann's visceral tenor solo. In addition to the usual horn section, the band featured Terry Johns on French horn and Cliff Bevan on tuba and this deeper sonority undoubtedly contributed to the invaluable extra heft afforded to the music. The remaining three tunes are all Runswick's, "Lainey's Tune," presumably a paean to Cleo, is a warm, airy piece featuring Warleigh on alto and Rendell at his spectacular best, on tenor. Bevan's meaty tuba kicks off "The Generals Of Islamabad" and is joined by Hymas on electric piano and some spectacular ensemble arrangements. Frank Ricotti solos next on vibes, demonstrating why he was such an in-demand fixture on the scene. Wheeler's soaring solo is as iridescent as would be expected from such a genius of the trumpet. The set closes with "In Three" a lyrical piece with a sumptuous brass arrangement and solos from Sulzmann, now on soprano, and trombonists Chris Pyne and Dave Horler.

The studio session derived from a rather more complex set of circumstances. British jazz Svengali Denis Preston contacted Runswick about a new project intended as a vehicle for launching the career of his recent discovery, Guyanan pianist and vocalist Mike McKenzie. Although McKenzie was the nominal bandleader for the album, Runswick was its de facto MD and main composer. Preston somewhat bizarrely wanted the music to be Latin-esque in content, thus inspiring numbers such as "Irene" which sounds like Return To Forever on speed (or possibly helium) featuring Lowther and Tony Coe on clarinet. The line-up for this studio album, probably the last under Preston's aegis, who died soon after its recording, was slightly different to the Golders Green gig. Hymas was not present, but others who were included vocalist Norma Winstone, Phil Lee on guitar, Alan Branscombe on keyboards and three drummers! The initial session was recorded without McKenzie who was later overdubbed on vocals and piano and can be clearly heard on numbers such as "Canto." Following the album's mixing and mastering, due to Preston's untimely passing, the record was never released. Thankfully, Runswick salvaged the tapes when Preston's Lansdowne studios closed some years later. Tony Coe's labyrinthine "Love Song" is probably the standout track and utilises Winstone's talents well, plus the all-too-rarely heard Lee gives a bluesy guitar solo here. "Strains For Laine's Brains" (another Cleo dedication?) is another channelling RTF with Lowther and Winstone to the fore. Ornette Coleman's "Dee Dee" originally heard on At the Golden Circle Stockholm (Blue Note, 1965) is given a quirky makeover. "One For Denis," dedicated to Preston, with an insistent 4/4 beat, benefits from a typically fluid solo from Tony Coe. Kudos goes to Runswick for making these truly remarkable tracks available for the first time.

When the Bough Breaks; Lainey’s Tune; The Generals Of Islamabad; In Three; Love Song; Irene; Canto; Strains For Laine’s Brains; Dee Dee; One for Denis.