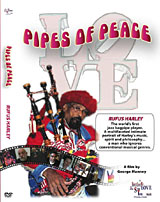 Rufus Harley (1936-2006) was a supreme individualist. He started out as a very competent reed player—on soprano, alto, and tenor sax, as well as the flute. He studied with Dennis Sandole, a supreme teacher, who sired the Coltrane generation of Philadelphia-rooted musicians. Then the desire to be unique took hold of him. He mastered the bagpipe (!), and made four very successful LPs for Atlantic Records, contributing to his world-wide renown. Then he came out with a message of peace, love, the unity of all peoples, and the love of America. In his unusual attire, he gave replicas of the Liberty Bell to such celebrities as Bill Cosby and Ed Rendell. Giving up the things of this world, he took to the streets of Philadelphia, where he could often be heard playing for the workers in Center City. In effect, he became a sort of latter-day saint.

George Manney, a filmmaker and musician, has produced a film telling the story of the colorful bagpiper and individualist, with conversations with Harley, as well as recollections by Kenny Gamble, Laurie Anderson, Byard Lancaster, and many other musicians, along with film footage from Harley's performances. The result is a heartwarming portrayal of Rufus Harley, the man and his music, that will etch the memory of the bagpiper firmly in the consciousness of anyone who views the film. Manney captures all the color, sound, and words of an era when a person could dare to be who he really was, without the social mask, and in the process convey a philosophy and a message.

What makes Harley credible and not just a "weirdo" is that he was a true jazz artist. He turned the bagpipes into a jazz instrument that could match the best of the reed players. (Unfortunately, this achievement is so difficult, that practically no one since has dared attempt it!) He really swung in the bebop and hard bop traditions, and could fit in with any of the top jazz ensembles of the time. But his true purpose in life became that of a good-will ambassador and an avatar of peace.

Was Harley a weird eccentric or a legend of jazz with a powerful message for the world? That will have to be the viewer's call, after weighing the evidence. Watching this film will assure knowledge and understanding of the human phenomenon known as Rufus Harley.