By Tom Greenland
October 9, 2008
Sign in to view read count
For almost a decade, the protean recording engineer Rudy Van Gelder has been remastering his analog masters into 24-bit digital format, affording fans an enhanced audio experience and/or a chance to rediscover previously hard-to-find or overlooked classics. Albums by three pianists—Red Garland's 1957 Soul Junction, Horace Silver's 1958 Further Explorations by the Horace Silver Quintet and Freddie Redd's 1960 Shades of Redd—are such exhumed gems, well worth the trouble it took to dig them up and polish them off. 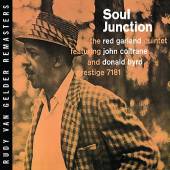 Soul Junction features John Coltrane (tenor sax), Donald Byrd (trumpet), George Joyner (bass) and Art Taylor (drums). In contrast with the Blue Note dates, it has a relatively informal, jam session vibe. The opening title track, a slow blues, runs over 15 minutes with an eight-and-a-half minute solo from the leader that, despite its unhurried pace, never droops nor loses its casual urgency. Garland uses repeated licks and block-chord voicings to ride out a seemingly endless series of rolling climaxes. Coltrane, a band mate from trumpeter Miles Davis' quintet, was developing the hyper-chordal style that came to fruition on Blue Train (Blue Note, 1957), recorded two months previously; his solos on "Woody 'n You," "Hallelujah" and "Birk's Works" are mirades of form and flow following in a similar aesthetic vein. Byrd rips and dweets expressively on his turns, rising to grandiosity on "I've Got It Bad."  Art Taylor's contributions call to mind the abrupt bass drum bombs of bebop pioneer Kenny Clarke.

Horace Silver's Further Explorations is a bit of a dark horse album, overlooked perhaps for lack of a "hit" single, or because the frontline—Art Farmer (trumpet) and Clifford Jordan (tenor sax)—was relatively short-lived. Nevertheless, it represents a strong effort from the pianist containing innovative compositional forms and phraseology. The odd-measure groupings of "Outlaw" and "Melancholy Mood" give these pieces a through-composed feel with plenty of forward momentum; "Pyramid" has unusual accents in its middle section and "Safari" contains upbeat and off-center lines. Silver is a consummate expert at small-group writing and the combo—with Teddy Kotick (bass) and Louis Hayes (drums)—realizes his visions with flow and punch. 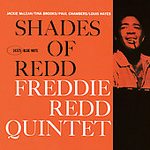 The final entry of the Van Gelder triumvirate is intriguing: a quintet date by Freddie Redd, the enigmatic pianist/composer best known for his role in the off-Broadway hipster play The Connection. The lineup is double-sax: Jackie McLean's keening alto matched with Tina Brooks' highly personalized tenor, with staunch support from Paul Chambers (bass) and Louis Hayes (drums). Redd's tunes are of-a-kind, well suited to the saxophonists' stylings; "The Thespian" is especially compelling for its haunting line and unexpected turns and "Melanie" is stuck-in-your-ear catchy. Redd's piano playing is competent if a bit poundy, most suited to tunes like "Just A Ballad for My Baby." McLean hones and shapes his sound here with poignant finesse, while Brooks exudes pure passion, minus the histrionics. Rounded out by Chambers' big booming beat and Hayes' strong stick-work, the disc is a keepsake.