BY WILBERT SOSTRE
January 28, 2011
Sign in to view read count 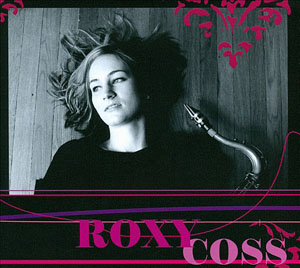 With the exception of a few instrumentalists like pianist Mary Lou Williams, most women in the so called golden era of jazz were singers. That situation has changed in the last few years, with more and more extraordinaire female musicians entering the jazz scene. Bassist Esperanza Spalding, pianist Hiromi, drummer Cindy Blackman and saxophonist/clarinetist Anat Cohen are just a few examples of the quality of female jazz musicians today. Newcomer Roxy Coss should be consider for inclusion in that list.

Coss is a saxophonist and flautist with a round, rich tone, and a composer well-versed in the jazz tradition. Coss' self-titled debut is a collection of original compositions, each one reflecting the diversity of influences in her music. Tracks like "Lately" and "July" can be classified as smooth jazz, while the funky sounds of "The Slow Accent" lean towards jazz fusion; but on "The Cherry On Top" and "Wandering One," the music is reminiscent of the Miles Davis/John Coltrane recordings.

Like most tenor saxophonists there is a Coltrane influence in Coss' sound, especially in her scalar approach to improvisation. And just like Coltrane, Coss achieves a perfect balance of lyricism and intensity in her improvisations through a superb sense of timing, rhythmic and harmonic structure. As a flautist she is equally impressive in the Latin-influenced "A New Time."

Roxy Coss is a promising debut from a multitalented young musician.