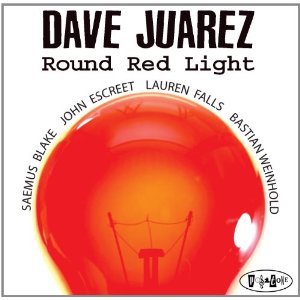 The quintet that came together to record Round Red Light is a unique conglomeration of established talent, rising-star scene-stealers, and artists who are only starting their ascent and journey upward in the world of jazz. While guitarist Dave Juarez falls into the last category, his debut album should go a long way in creating a buzz around the Barcelona-born musician.

Juarez presents a nine-song program of originals which often take shape around Seamus Blake's magnetic and magnificent tenor saxophone. Juarez and Blake blend wonderfully when they latch onto one another and deliver unison lines, but each man brings his own personality into his respective solo spots. Blake can deliver muscular tenor work as he rides the wave of energy that the band creates ("Lonely Brooklyn"), but his gentle gestures almost give off an alto-like allure at times ("Round Red Light"). Not to be outdone, Juarez knows how to tear things apart with razor-like lines ("RNP," "Montpellier View" and "Luna De Barcelona"), but he's no one-trick pony. His guitar work is attractive and welcoming when placed in a ballad setting ("Round Red Light") and, while Juarez doesn't sprinkle suggestions of Spain over most of his music, the one number that hints at his background ("The Echo Of Your Smile") shows off another side of his musical personality and proves to be an album highlight.

While Juarez and Blake are simpatico soloists and frontline partners, pianist John Escreet stands squarely on his own, in the middle of the ensemble. Juarez and Blake occasionally remove themselves from the situation, leaving Escreet in the driver's seat as each member of the rhythm section uses their quick reflexes and agility to communicate at the highest level ("Lonely Brooklyn"). Bastian Weinhold's drumming meets at the desirable crossroads of constant mobility and musicality, while bassist Lauren Falls is flexible, quick to adjust to any bends in the road, and solid as a rock when the music calls for a stabilizing force. These three musicians combine to form the rare combination of a rhythm section that takes plenty of chances without sacrificing a solid foundation for the other musicians to move over.

While red lights usually serve as a signal to stop, Round Red Light is a sign that guitarist Dave Juarez is going places, as he fleshes out his own unique compositions with the help of this marvelous ensemble.