BY FLORENCE WETZEL
March 16, 2004
Sign in to view read count 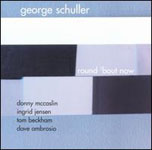 Round ‘bout Now is the recording debut of the George Schuller Quintet, a group that has played steadily in New York for the past four years. From its title to its aesthetic, the CD is inspired by Miles Davis, particularly his fertile pre-fusion period in the late ‘60s. But although Davis is the reference point, this group of talented musicians makes the material their own, using the master to find their own mastery.

Of the eight songs, four are Schuller originals, and three are by Davis: “Side Car,” “Circle in the Round,” and “Filles de Kilimanjaro.” “Circle in the Round” offers a good example of Schuller’s arranging and homage. The original is one of Davis’ most intriquing pieces, a long hypnotic song driven by a relentlessly mesmerizing groove. Schuller’s version is considerably shorter, but he stays true to the mood. Ingrid Jensen’s haunting trumpet is both strong and transparent, and the bass and drums create a boiling drive just beneath the surface. The original’s almost menacing quality is respected and quoted, but a transformation occurs as the song reaches at transcendence.

Another of Schuller’s achievements is creating a cohesive voice throughout the CD. His compositions compliment Davis’, weaving a web of reflecting sounds and themes. Part of the quintet’s distinctive sound is due to its use of vibes instead of piano; the airy, resonant tones create a spacious underpinning, which again echoes Davis, both his own playing and his groundbreaking use of electric piano. Vibraphonist Tom Beckham takes centerstage with confidence, and he also shines in a supporting role.

The other quintet members deserve special mention as well. Donny McCaslin is one of the strongest horn players on today’s jazz scene. His playing is alternately majestic, searching, melodic, and fractured - and sometimes all four at once. Trumpet and flugelhorn player Ingrid Jensen has the formidable challenge of invoking Davis while staying true to herself. Fortunately Jensen has the necessary talent and courage; her playing acknowledges Davis, but is held together by an emotional consistency uniquely her own. Bassist Dave Ambrosio gives the group a lyrical drive, and he also contributes excellent solos. As for Schuller’s drumming, don’t be fooled: he doesn’t solo, doesn’t splash, but each hit is exactly right. His intelligence, skill, and love for this music is the backbone holding the group aloft, while simultaneously pushing it forward.

This CD can be enjoyed on several levels: those who know Davis’ music can appreciate the subtlety of Schuller’s arrangements, and those who don’t can appreciate an excellent CD full of compelling music. Davis is famous for encouraging his musicians to “play what you don’t know”’; on Round ‘bout Now the members of the George Schuller Quintet play both what they know and what they don’t know, and the results are captivating.