Kenny Dorham: 'Round About Midnight At The Cafe Bohemia 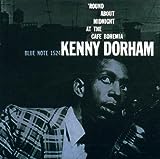 Trumpeter Kenny Dorham played extensively with Charlie Parker, Horace Silver, Sonny Rollins, and other New York heavyweights of the 1950's and 60's. He was a hot player, but he never built up his technique to the point where he could cut the most daring passages like his contemporaries Dizzy Gillespie, Clifford Brown, Lee Morgan, and Freddie Hubbard. On the other hand he said more with his sound, which came in several shades of blue—he paid attention to nuance. He was particularly drawn to Latin rhythms.

This music was recorded in May, 1956 shortly after Dorham left the Jazz Messengers. Dorham called his band “The Jazz Prophets” to emphasize the connection with Art Blakey. Also Blakey had recorded a successful album at the Bohemia (a well-known New York club) the previous year with Dorham in the band. For this session guitarist Kenny Burrell sat in, and he contributed in a big way.

The band focuses on soloing, and all four front line players are on. Burrell and Timmons, two of the top blues players of the era, are caught near the beginnings of their New York careers. Every Burrell solo is riveting, and as always his technique is impeccable. The alternate of “Mexico City” features him all the way. Timmons is still getting himself together— he sometimes gets caught up in licks (clichés), and he doesn’t quite know how to approach ballads. Still his feel and phrasing are strong, and many of his solos have their moments. He adds greatly to the band, especially as a propulsive accompanist. (The Jazz Prophets without Burrell had recorded a few weeks before in the studio. The previous record was with a capable pianist who did not have Timmons’ feel for the blues. Café Bohemia works much more mainly because of Timmons.)

Monterose, an equally accomplished player, complements the other soloists with his more relaxed style and greater sense of pace. (He is not passive.) Rhythmically he is out of an earlier, Lester Young-inspired rhythmic feel. His best choruses come on “My Heart Stood Still.” Dorham's solos are the most varied and musically adventurous. He is the best ballad player in the band. As a bandleader he has a light touch but keeps things focused.

The repertoire is mostly the blues or blues-flavored tunes suitable for blowing. Many are borrowed from Dorham's contemporaries and retitled with Dorham as “composer”. “Hill’s Edge” is “Tune Up” by Miles Davis. “Mexico City” is Bud Powell's “Tempus Fugit.” “The Prophet” derives from Sonny Rollins’ “Airegin”. “K.D. Blues” is a variant on Oscar Pettiford's “Blues in the Closet” (AKA “Collard Greens and Black-eyed Peas”). “Royal Roost” and “N.Y. Theme” are common property songs of the time: “Royal Roost” was recorded as “Rue Chaptal” by Kenny Clarke and as “Tenor Madness” by Sonny Rollins. “N.Y. Theme” is the same tune Miles Davis recorded as “The Theme” and as “Trane’s Blues.” (Dorham later matured into a compelling composer on a series of burning records often with Joe Henderson, his most provocative collaborator.)

Sonically this is probably one of the best live sessions of the time. The balance is natural, and the musicians played into the microphones. Unfortunately the piano sounds cheap. Six other alternate takes from the session remain unissued.