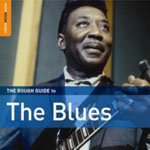 It's not clear whether this CD has been compiled with the idea of it being listened to or as some kind of token or souvenir. You can have your own copy of Mamie Smith's "Crazy Blues," the first ever Blues recording? It would have been better, in representing the so-called Classic Blues, to have included Ida Cox or Chippie Hill—blues more likely to appeal to somebody who goes for Muddy Waters, rather than vaudevillian ladies.

The set seems to have been put together by finding a list of celebrities of the blues and including one track each, without listening to them.

Lemon Jefferson and Charley Patton are (obviously!) obvious choices, dubbings leased from Document Records and the sound as good as you'll find. The same can't be said of some of the more recent recordings. There's Memphis Minnie, but why specifically Robert Johnson? It would have been better to have sampled one of his associates—say Junior Lockwood—and pointed out how wonderful some of these men were, with a note about style.

It seems that if hackneyed choices could be made here, they were. Big Bill Broonzy's "Key To The Highway" is obvious, and "Roll 'Em, Pete" (Pete Johnson with Big Joe Turner) is terrific Kansas City blues, but no substitute for representing a mainstream blues and barrelhouse pianist.

Post-war, the Chess group of labels recorded classics by people famous enough to get included here. The artists, however, are represented by recordings from other sources, and well below par. The substitutions are inferior—Muddy Waters from a relatively late period concert with a noisy audience; Howlin' Wolf a bad choice from 1953, Sonny Boy Williamson number two with a young English band, one of them singing but not named (the set is also rather short on information). Buddy Guy's "I Can't Quit You Baby" is another inferior-sourced item.

Presumably someone thought that if it's T-Bone Walker, the choice must be "Stormy Monday." His most famous song, yes, but an inferior version here. Arthur Crudup's "That's All Right" is okay, and you can hear how little Elvis Presley needed to add. "It Hurts Me Too" is an obvious Elmore James selection, though not the best sound. John Lee Hooker's "Boom Boom" should not have been preferred to the brooding, smoldering dark magnificence of his early recordings.

It's hard to believe that the same principles apply almost all through this compilation, achieving a remarkable consistency in needless mediocrity. There are also little things in the notes like the notion that B.B. King's style summed up blues guitar hitherto. If your ears don't tell you that ain't right, B.B. himself has spoken of the influences of Slim Gaillard, Charlie Christian; and Django Reinhardt.

I'll say nothing about the rest, except that the one idea of any worth was to include, as a final track, a sample from African Ali Farka Touré, relatively recently deceased and much missed. Too late.