BY HRAYR ATTARIAN
December 20, 2015
Sign in to view read count 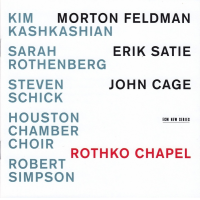 On ECM's superb and captivating Rothko Chapel an elite group of musicians interprets Morton Feldman's sublime title piece and several others by John Cage and, the father of western musical modernism, Erik Satie. The disc explores the common conceptual and stylistic threads between the Feldman and Cage's works and their origins in Satie's oeuvre.

Although Feldman's composition is not recorded in the Chapel itself the ambience is evocative of the physical building itself. The spiritual sanctuary and painter Mark Rothko's exquisite art are reflected in the solemn yet vibrant performance. Violist Kim Kashkashian, one of the premier practitioners of her instrument, coaxes out of it a melancholic melody that floats over percussionist Steven Schick's kaleidoscopic array of chimes, beats and rumbles. The splendid Houston Chamber Choir under conductor Robert Simpson's elegant direction provides haunting collective vocalese that Schick and his tolling bells underscore. Soprano Lauren Snouffer and mezzo-soprano Sonja Bruzauskas alternate ethereal wordless songs with Kashkashian's poignant pizzicato. Pianist Sarah Rothenberg, playing the dulcet celeste, buoys and punctuates Kashkashian's eastern flavored solo with her crystalline keys.

The remainder of the program replicates the Chapel's 70th anniversary concert as it alternates pieces by Satie and Cage. Most of these feature Rothenberg's innovative pianism. Given her deep immersion in 20th century music and its cultural significance Rothenberg, indeed, is the ideal person to explore this creative connection between the two trailblazing composers.

Sandwiched between Satie's "Ogive #1" and "Ogive #2" is Cage's transcendent "Ear For Ear (Antiphonies)." Rothenberg gracefully melds the softer elements of Satie's compositions with brisk and percussive sounds. She expresses splendidly the continuum between the cerebral and emotive inherent in these two short works. Simpson and Houston Choir channel Cage's otherworldly liturgy. Waves of tense exchanges between tenor L.Wayne Ashley and the rest of vocalists enhance the somber and dramatic atmosphere.

This brilliant and provocative album is not only homage to an inimitable artwork, the Rothko Chapel; it also contains infrequently documented masterpieces. As such it exposes the aesthetic and ideological threads that tie together the creative legacy of three ingenious pioneers of the musical Avant-Garde.