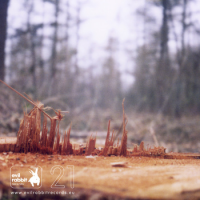 Sequoia is an international, Berlin-based double bass quartet comprised of German Meinard Kneer, active on both the Dutch and Berlin improvisation scenes and the founder of Evil Rabbit Records; Klaus Kürvers, who initiated this project, a former architect and cultural historian and another player of the Berlin improvised scene; Canadian Miles Perkins, a frequent collaborator of French pianist Benoit Delbecq, and Italian Antonio Borghini, who studied with Joëlle Léandre and Barre Phillips. The quartet explores the multiple sonic possibilities of the double bass, employing various extended and invented techniques along with unconventional tools and objects in order to coax a new palette of sounds from the bull fiddles. The quartets repertoire is based on structured improvisations and graphic ideas.

The four are positioned on its debut recording along a wide spectrum—Kneer on the far right, Kürvers on the middle right, Borghini on the middle left and Perkin on the far left—that creates a nuanced and diverse deep-toned sound, mainly on the sonic searches pieces as "Resting Crows" and "Inside." But the sonic strategies of the quartet are versatile. The quartet creates a tight, minimalist interplay on "Birdcage," where the sound of all four forms a reserved and focused unity, or a tight sound poem on "Lifts & Accelerators," articulated by all four with their bows. The fierce usage of the bows on "Passing By" produces a series of disturbing multi-phonics and overtones.

The longest, self- titled piece investigates patiently with various extended techniques and its sonic effects, of each of the musicians and together as a quartet. This cerebral approach demands precise command and disciplined control of the double basses, but the sonic effect is arresting. The double basses remotely sound as stringed instruments but create together an ethereal industrial-electronic sound wave, interrupted occasionally by wooden percussive hammering.

Impressive experiment with a wide array of deep-toned sounds.