By IAN PATTERSON
October 14, 2013
Sign in to view read count 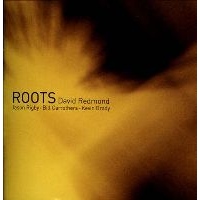 Irish bassist David Redmond is nothing if not versatile, playing in the thrilling World music outfit Yurodny and in the small jazz combos of pianist Phil Ware, drummer Kevin Brady and veteran guitarists Tommy Hafferty and Louis Stewart. Belfast's Soulman Van Morrison has also called upon Redmond's services. Across the pond, to use Irish parlance, Redmond's beautifully earthy tone has lent depth to the music of vocalist Ian Shaw and trumpeter Guy Barker, amongst many others. Now he's stepping out as a leader with Roots, a striking work of rare compositional maturity for a debut recording.

A somber beauty pervades the atmospheric tone poem "Kish"; Rigby's tenor purrs and flutters with an afterhours intimacy as bass, piano and Brady on brushes tread softly. "Past Place" shares a similarly sparse quality, with Carrothers teasing little tumbling figures from the keys. There's greater collective urgency in the title track where Redmond's walking bass drives the quartet in double time. Rigby and Carrother's extended solos of contrasting character are punctuated deftly by the lively and imaginative Brady.

"Big Mouth" too fairly cooks, with a repeating six-note bass ostinato providing the initial impetus for Carrothers to tear loose. Redmond and Brady keep the quartet's keel steady but there's an overriding sense of freedom in their playing at the same time. Rigby's measured lines steer the quartet into more controlled territory towards the end. "Missing Man 1" and "Missing Man 2" are vignettes that serve primarily to vary the recording's dynamics. The former pitches piano bass and brushes together in a neo-classical dirge whose minimalism is matched by its emotive power. The latter follows a similar route, with Rigby's plaintive tenor central.

Carrothers sits out "Prarie Dog," allowing Redmond and Brady to flourish in the additional space. Their loping rhythms groove steadily on this contemporary sounding number as Rigby's lithe tenor sings. At a little over three minutes, however, it's something of a tease. The more substantial "Last Call" leads from an extended bass intro into a very lyrical, slightly nostalgic space. Saxophone caresses the main melody tenderly, but in truth all four voices carry equal weight in this understated, touching composition.

This absorbing debut satisfies on a visceral and cerebral level. Essentially though, it's music that is felt. Sophisticated yet accessible tunes all, Redmond's highly melodic approach to composition encompasses wide-ranging emotions. The music breathes deeply, grooves hard when required, and, like the best music, rewards repeated listening.