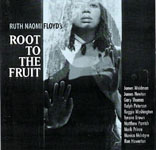 Over the course of her two previous recordings, Walk and not be Faint and Fan into Flame, vocalist Ruth Naomi Floyd has directly approached Christian spiritual themes in jazz, with better success than other artists in other genres. On Root to the Fruit, Floyd continues her journey in earnest, exploring jazz modes of delivery as divergent as field chants and Archie Shepp solos.

"No Hiding Place opens the disc with conga riffs settling into a walking rhythm. Floyd sings to a melody close to that of "When the Saints Come Marching In. The effect is startling, and it evolves with the addition of voices and percussion until the song reaches its abrupt ending. It is certainly different enough to keep one's attention for the next song, "Mere Breath, which musically sounds like a pre-war Berlin outtake from Cabaret. The effect is potently exciting as the band carefully walks the high wire with a swing certain to throw the listener off. "Mere Breath offers the spotlight to flautist James Newton and pianist James Weidman, who solo inventively over the loping waltz of the rhythm.

Stunning as "Mere Breath is, it in no way prepares the listener for the remainder of the recording, beginning with "Oh, Freedom, which is buoyed by what sounds like a Dixieland band conducted by Ornette Coleman. While Ruth sings a familiar chord progression, the band plays anything that is familiar, filling the space with a cacophonic sound, somewhere between music and confusion. In short, this is brilliant writing. The song eventually straightens out into a hard swing featuring more James Newton flute thoughts.

This is just a minor smattering of the graceful treasures to be found on Root of the Fruit. Central to the disc is the traditional "Sometimes I Feel like a Motherless Child, which begins as a duet between Floyd and acoustic bassist Matthew Parrish. As the piece progresses, the other members of the band join in recklessly, creating dissonance to support the plaintive lyrics of the song. Floyd's voice alone provides the remnant that holds the piece together before Parrish launches into a swaggering walk.

Root of the Fruit is the finest of Ruth Naomi Floyd's recordings to date. Her talent is undeniable and her vision is extraordinary.

No Hiding Place; Mere Breath; Oh, Freedom; God is My Shepherd; Where?; Dagarth