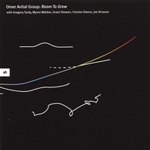 In 1996, the Omer Avital Group was in transition. Due to their increasing workload outside the band, Avital was forced to replace original members Ali Jackson and Mark Turner. Losing musicians of that quality would have crippled other groups; but if Room To Grow (recorded live at Smalls the following year) is any indication, the band didn't miss a beat when drummer Joe Strasser and tenor player Grant Stewart took their places.

Room To Grow has only three tracks—one original (Avital's "Kentucky Girl ) and two standards. That's not a very varied menu, and leaves the band open to charges of over-indulgence. However, it becomes abundantly clear that the Avital Group is all about exploration, with each soloist getting the space to make his mark and apply his voice to the matrixes Avital creates. The results are never boring, and often breathtaking. The opening of Coltrane's "26-2 is re-cast as a soaring choral piece, with the all-reeds frontline performing the vocals flawlessly, and taking the spirituality in the piece to another level.

Avital unaccompanied is a wonder, and he visits that space often; both "Kentucky Girl and Cole Porter's "It's Alright with Me are prefaced by Avital solos. With the former, it's a great introduction to anyone unfamiliar with Avital's singular tone, which remains aggressive and engaging even when he plays on the softer side. His solo transitions into a loping melody that feels like an undiscovered Mingus blues. On the Porter composition, Avital communicates the sadness of the protagonist, who may say it's alright that his lover wants to leave, but deep down, the loss is as heavy as an anchor. This position is echoed by Myron Walden, whose haunting alto amply demonstrates the anger that goes with loss and loneliness.

Walden shows a penchant for risk that is nowhere to be found in his work on The Source (World Culture Music, 2006), Kendrick Scott's debut as a leader. Here, Walden repeatedly steps out on the edge and screams like a banshee. It's just one of the many highlights served up by a phenomenal front line anchored by four saxophones. That instrumental makeup should sound like death, but the arrangements are as varied and vital as you would get from a traditional big band configuration. It helps that Gregory Tardy mixes things up: his clarinet on "It's Alright adds to the old-school feel when Avital's arrangement changes from raucous exploration to bubbling traditionalism; and Tardy's flute adds a piping tone to the choir at the start of "26-2.

Given the size of the venue, seeing the Omer Avital Group at Smalls must have been like going to the foot of the Empire State Building and looking up. Room To Grow is the second release chronicling the evolution of this towering unit. It's a good thing club owner Mitch Borden kept the tapes, because this is a band that needs to be remembered.