BY GLENN ASTARITA
February 10, 2020
Sign in to view read count 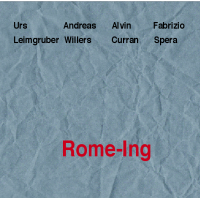 The players afford themselves plenty of room for discovery and invention while fusing the group sound into an unclassifiable array of futuristic passages, complete with Willers' scratchy notes and Urs Leimgruber's circular phrasings. Moreover, the guitarist and keyboardist's tasteful integration of background EFX casts bizarre aspects into the already out-of-the-box developments. For example, on "Rome-Ing Part II" the saxophonist's wistful lines amid eerie backdrops transform into wavy currents atop a subtle undertow, intensified by Leimgruber's high pitch squeals, and contrasted by Curran's rolling piano riffs.

"Rome-Ing Part III" is an exhilarating work via scorching blast furnace-like outbreaks, driven home by drummer Fabrizio Spera's bustling asynchronous patterns as the band ventures to parts unknown. However, "Rome-Ing Part IV" offers a diversion due to the saxophonist's bluesy phrasings and Willers' microcosmic parts, offset by oddball sound-sculpting mechanisms. Nonetheless, this mind-altering journey is the antithesis to easy listening fare. Then again, we wouldn't expect anything less from these shrewd instrumentalists.