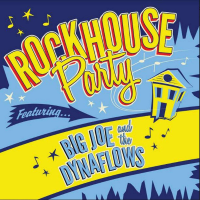 Big Joe Maher, a veritable institution in our nation's capitol, has been active in Washington's jazz and blues scene since the 1980s, when he put together his own combo and also began drumming for former Powerhouse Sound guitarist Tom Principato's blues band.

But it wasn't until he recorded his own debut, "Good Rockin' Daddy," in 1989 that fans outside the D.C. beltway discovered that he was nearly as powerful a vocalist as fellow D.C. singer George Leh, who fronted Powerhouse with Principato (and remains active in the capital area and New England).

"Rockhouse Party" finds Maher and Company in the jump blues vein he's been mining for the better part of four decades. The voice isn't quite as smooth as the last time we heard from him (2011's "You Can't Keep a Big Man Down)—but that touch of fraying along the edges of his strong vocals only adds to the expressiveness, injects a bit of world weariness.

The band is rock-solid: Longtime pianist / organist Kevin McKendree is back (he's been on all but one of the Dynaflows' albums). McKendree and Maher have the kind of anticipatory empathy that only comes over years of playing together, and the interplay between piano, organ (apparently overdubbed, but still masterful) and Maher's soft brushes on "World Gone Wrong" is magic. The rest of the band is new since the last recording: Tom "Mookie" Brill is on bass, while guitar duties are shared between Yates Kendree and Robert Frahm.

On up-tempo rockers like "Go With the Flow" and the opening track, "Driving Wheel," Kendree and Frahm trade guitar leads with confidence and imagination—as if this were a guitar band. But they comfortably roll back and forth with a swapping of guitar/keyboard roles with smart, jazz-colored fills on songs like "Go On Fool" and a cover of Percy Mayfield's "Two Years of Torture." And on the instrumental "Sleepy Joe," the guitarists and McKendree share the lead equally—not too far from what Booker T. Jones and Steve Cropper have done so well over the years.

Everything emanates from Maher's splendid drumming. Lithe and swinging, his loping backbeat is jazz, blues and R&B all at the same time. It's a deep groove, just dripping with soul, yet firmly grounded in jazz and swing—as if Ali Jackson Jr. and Duffy Jackson were somehow melded together. He's not much for solos or showiness—his approach to drumming is akin to Count Basie's method of playing piano: Support everyone else and don't worry about who gets the credit.

In the minor complaint department would be the five tracks with Brill on lead vocals. He's a pleasant enough singer, and offers a contrast to Maher, but this is a Big Joe album—and when you only get an album every five years or so, well, it would be nice to have had more of Maher's distinctive singing featured.

But that's balanced by the unexpected delight of young up and coming blues phenom Erin Coburn taking lead on "I'm a Country Boy," confidently playing off of Kendree's opening solo, and adding her own improvisations that build on his.

About Big Joe & The Dynaflows