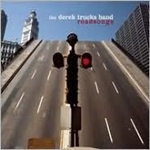 A full-length extension of the previously issued EP, Already Live (Victor, 2009), and a more than worthy successor to Live At the Georgia Theatre (Sony Legacy, 2004), Roadsongs accurately summarizes the evolution of The Derek Trucks Band over its sixteen-year existence. Recorded at Chicago's Park West, the site of the group's concert DVD Songlines (Legacy, 2006), this double-disc set collects standards of the DTB repertoire as well as selections from the unit's most recent studio recordings, many of which are freshened by the presence of a three-piece horn section.

The horns are never intrusive, but rather are arranged appropriately to the material. Thus, saxophonist Mace Hibbard, trumpeter Paul Garrett and trombonist Kevin Hyde are celebratory on "I'll Find My Way" and majestic, in an understated manner, on the melancholy "Day's Is Almost Gone." Hibbard also takes a bracing solo on "Afro Blue"—and in so doing aids, in no small part, to shift the group's extended rendition of Mongo Santamaria's jazz standard to an altogether higher gear.

The Derek Trucks Band's rounds during "Sailin' On" are indicative of an unusual level of empathy, honed by years on tour together. The presence of its charter members—drummer Yonrico Scott and bassist Todd Smallie—benefit the most from Trucks' production and Chris Shaw's mix: they have developed their own panache as the center of gravity for the group. In his lead vocals on tracks such as "Down Don't Bother Me," Mike Mattison refuses to call attention to his role, keenly aware that his voice is another instrument in the ensemble. Meanwhile, the keyboards, flute and singing of Kofi Burbridge are a source of versatility that mirrors the band's mastery of such an eclectic range of material, with elements of pop, R&B, blues, soul, jazz and even Eastern tones weaving in and out of the music.

Trucks elevates the level of playing throughout his group in various ways. He continues to grow as a brilliant soloist (on slide or finger-picked electric guitar)—tough and tenacious on Bob Dylan's "Down in the Flood" and tender during the intro of "Already Free." But the once and future Allman Brothers Band relishes the role of rhythm guitarist too, as this affords him the opportunity, during Bob Marley's "Rastaman Chant," to wield his acute sense of dynamics as an accompanist within the group. This cut also happens to be the sole interval where Count M'butu's percussion is conspicuous in its presence.

In the hands of Trucks & Co., Marley's tune radiates as much a sense of delight as Big Bill Broonzy's "Key to the Highway"—and, in the segue from "Get Out of My Life Woman" into an absolutely white-hot version of Jimi Hendrix' "Who Knows," the band imbues its playing with a joy proportionate to its technical skills.

Dedicated Derek Trucks Band fans will find reaffirmation of their previous live experiences with the band in Roadsongs, while newcomers to this extraordinary group will be only a little less impressed.

CD1: I'll Find My Way; Down In The Flood; Sailin' On; Get What You Deserve; Days Is Almost Gone; Already Free; Afro Blue. CD2: I Know; Down Don't Bother Me; Don't Miss Me; Rastaman Chant; Key To The Highway; Get Out My Life Woman/Who Knows; Anyday.