By Susan Lozinak
November 24, 2007
Sign in to view read count 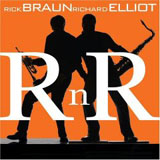 What happens when you take two powerhouse smooth jazz artists and put them together on one album? You not only get a double dose of hot funk and cool vibes, but also steamy Latin rhythms oozing with sex appeal, making its many textures a delight to the all the senses. On RnR, trumpeter Rick Braun and saxman Richard Elliot sizzle as they deliver all the goods on this outstanding collaboration.

The twelve original songs on RnR were written and produced by Braun and Elliot, and contain a seamless mix of contemporary jazz, funk, R&B and pop. They are no strangers to each other, as they have toured together and made guest appearances on each other's projects numerous times.

Sparks fly right off as the opening title track sets the bar high. Braun and Elliot are tight as can be, blowing scorching hot notes through their horns, the song's hot vibe full of energy and soul. Continuing this theme is the funky "The Stranger, where Elliot shows his stuff, packing a big punch on tenor. "Down and Dirty gets right down to business, as Nate Philips takes his bass to task, mingling cool notes with that of Braun and Elliot. Elliot really sets the groove on the infectious "Curve Ball, a song that puts the horns to task and delivers a home run.

Sprinkled generously into the mix are soulful ballads such as "Sweet Somethin, "The Stranger and "Sunday Night. These songs are soft and sassy, danceable and relaxing. The impressive talents of percussionist Lenny Castro and keyboardists Rex Rideout, Jeff Lorber and Philipe Saisse really make these songs shine, as do the others on RnR.

R n R closes with the inspired R&B groove and Latin flair of "Sao Paulo. Braun's horn playing is flawless, while Castro intertwines his golden touch on percussion to round out this exceptional collection. Braun and Elliot take smooth jazz to new heights with this horn ambitious album, making it sure to soar high for a long time to come.

Visit Rick Braun and Richard Elliot on the web.

Susan is a freelance writer living in New York State