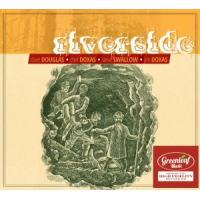 The collaborative quartet Riverside was initially founded by Montreal-based tenor saxophonist Chet Doxas to explore the legacy of groundbreaking American composer and multi-reedist Jimmy Giuffre. Long admired by fellow jazz musicians for his innovative use of counterpoint, microtonality and rhythmic freedom, Giuffre has rarely received the sort of popular acclaim his body of work deserves.

Joined by renowned trumpeter Dave Douglas and his brother Jim Doxas on drums, the group is completed by legendary electric bassist Steve Swallow, who provides a direct link to the past, having played on Giuffre's history-making 1960s trio recordings with pianist Paul Bley, including the landmark Free Fall (Columbia, 1962), as well as the threesome's critically-acclaimed reunion albums from the early 1990s.

Although the assembled quartet only performs one actual Giuffre composition on its self-titled debut—the vivacious bluegrass-inflected "The Train and the River," as well as a heartfelt rendition of "Travelin' Light," a standard commonly associated with Giuffre—the remainder of the tunes reflects the dedicatee's influence, especially in terms of writing and arranging.

Augmenting folksy Americana-inspired themes with pliant rhythms, the ensemble veers from the rhapsodic to plaintive, emboldening probing excursions with a freewheeling sense of interplay. Doxas and Douglas make a galvanizing frontline, imbuing the contrapuntal cadences of modernist swingers like "Thrush," Handwritten Letter" and "Big Shorty" with a spirited reverie that evokes the unfettered vivaciousness of pre-war jazz. Blues-based pieces like "Front Yard" and "Backyard" on the other hand, trade rousing expressionism for more introspective ruminations.

As the group's anchor, Swallow alternates between guitar-like chordal accompaniment and percolating melody lines, leaving space for the drummer to modulate tempo and dynamics. Swallow's wistful soliloquy on the introduction to "Old Church, New Paint" exudes an appropriately gospel-inspired air, while his steadfast fretwork on the closing medley "Sing On The Mountain/Northern Miner" underscores the group's manifold strengths as they majestically ascend from soulful impressionism to rapturous lyricism.

Riverside pays homage to Giuffre's progressive concepts through the creation of new works that draw inspiration from his oeuvre, rather than merely rehashing it. The deceptive simplicity of folk-based themes, rich harmonic counterpoint and subtle rhythmic interplay are the basic foundations of Giuffre's aesthetic—aspects Riverside makes its own on this vibrant premiere.