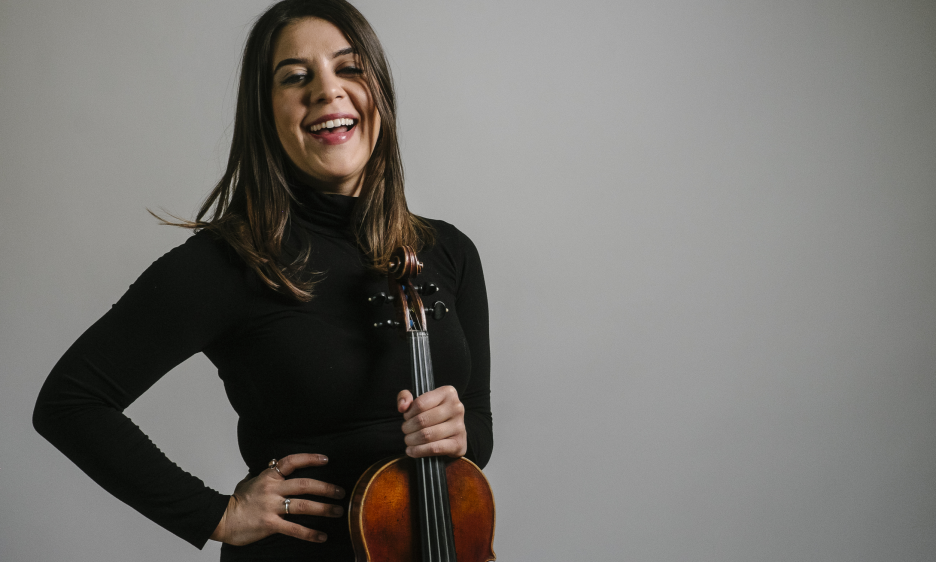 Nora has been called the world's greatest Jazz violinist, and it's not just me saying that. My parakeet echoed the same sentiments, and the bird and I rarely agree on anything.

For those of you who may not be aware, Your Own Personal Genius was once a fresh-faced music major at Mars Hill University in North Carolina. My principal instrument was euphonium (I also had a minor in trombone). Later, I left to study Jazz with Ellis Marsalis during his residency at Virginia Commonwealth University. As a double-threat Classical euphoniumnist/Jazz trombonist, I discovered two things early on: 1) There was virtually no demand for my talents, which is why I ended up a writer, and 2) Being proficient at this combination of instruments was highly unlikely to get me very far with the ladies. It was no coincidence that very shortly after this, I grew a mullet and took up guitar. It was the eighties: enough said.

There are certain instruments that are canonical as far as Our Music goes. The saxophone, of course, is virtually synonymous with Jazz. The guitar is represented substantially in Jazz, as is the bass, but are equally well-known for their work in Rock. The trumpet and trombone straddle the line between Our Music and Classical. Drums are ubiquitous, as are keyboards. As for the euphonium and its relative the tuba, there is virtually no room for them outside of Classical. They may exist in Jazz, but like Your Own Personal Genius, there is only a small space in which we are allowed to ply our respective trades.

Enter the violin. Its Classical cred has been established for hundreds of years, but it has been a part of Jazz virtually since the beginning. Violinist James Palao was thought to have coined the term 'Jazz.' Joe Venuti was there almost from the very start, working with guitarist Eddie Lang, and pioneering the concept of the 'hot violin' (not to be confused with a 'hot brown,' which is a sandwich). Stephane Grappelli and Jean-Luc Ponty kept the instrument's hand in the game throughout the Twentieth Century. Adepts such as Regina Carter and Zach Brock carry on with bow in hand these days, acting as bookmarks for the instrument in the continuing story of Our Music.

And then there is Nora Germain. I would be lying if I said there was no favoritism in the manner in which I choose who will be the subjects of these infrequent missives. I tend to select those artists who represent my own personal tastes. In the interest of full disclosure, I should mention that Nora and I are also Facebook friends, which, as you know, means absolutely nothing in contemporary society. My parakeet, Al Neri, who is far more versed in current slang than I am, called her 'completely lit.' I do not disagree, though I'm wondering if I might need to limit his exposure to the Internet.

Nora Francesca Germain is a musician and writer residing in Los Angeles, where she also uses her super powers to fight crime and avenge the wronged. A graduate of the prestigious Idyllwild Arts Academy, a boarding school in California not unlike Hogwarts Academy except with more modern dance and fewer evil wizards trying to kill everybody, Nora was the first Jazz violinist to graduate from the school. She was also the first violinist to graduate with a degree in Jazz Studies from the USC (home of the Trojans) Thornton School of Music. Others had tried, but none could make it through the grueling Grappelli Grappa Challenge where the candidate must play Stéphane Grappelli's version of "How High the Moon," doing a shot of the fragrant grape-based brandy every time they miss a note. 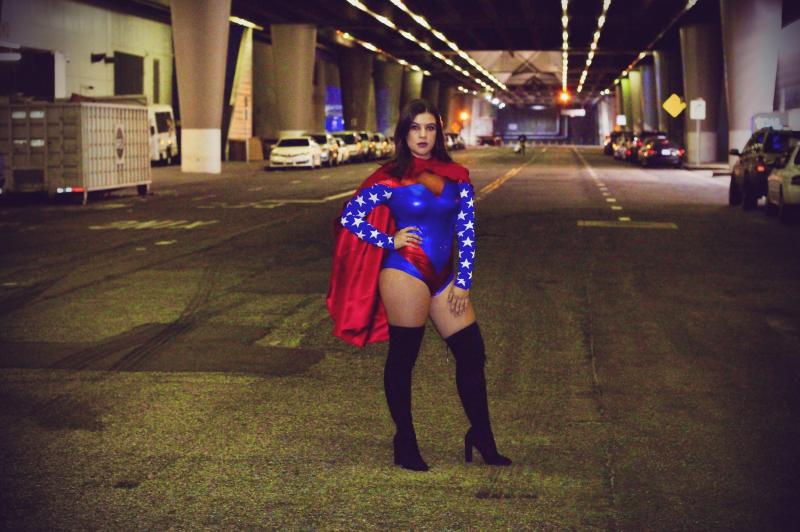 Nora began playing violin at age four. She was introduced to the violin by her parents, both violinists, and her cellist grandmother. All three were members of the Madison (Wisconsin, home of the Badgers) Symphony, and surrounded our young heroine with music. By the age of ten, Nora was performing with professional bands, improvising beyond the confines of her classical background and learning such important lessons as why roadies smell the way they do. Her mother became a teacher and co-founded the Suzuki Strings of Madison in the early '90's, a classical violin school and Japanese motorcycle club that Nora attended as a child.

Coming into her own as an adult, she has worked with a wide range of performers from Kristin Chenoweth to Barry Manilow to Jeff Goldblum (?!). In 2014, she appeared with English singer-songwriter Sam Smith on the MTV Video Music Awards and was also featured soloist with Marshall Hawkins' Seahawk Modern Jazz Orchestra (not to be confused with the Seattle Seahawks, though they could also probably beat the Cleveland Browns). In 2016, she was called upon to perform for the Eckhart Tolle Foundation (there's a 'Tolle booth' joke here somewhere, but I'll leave you to work it out on your own time) and appeared in a video with Postmodern Jukebox performing the theme to the show Family Guy that has been viewed over a million times (1,000,004, since the bird and I have watched it a few times).

Though not yet even thirty, she's already appeared on over one-hundred recordings and has seven of her own Jazz albums under her belt (not literally, unless she has one of those cool utility belts like Batman has. Which would make sense). And she's showing no signs of slowing down. She has worked on everything from podcasts (such as The Creative Life with James Taylor. Not that one, the other one) to independent films to music videos for artists like JMSN and KNOWER (and no, my caps lock isn't stuck. That's how they write it).

Socially and politically active, as well as involved in charity work, she advocates for the arts and sciences (such as potion-making, or am I thinking of Hogwarts again?). She's also a fellow polymath, and has studied such disparate topics as Buddhism, dance, emergency medicine, oceanography, and Spanish. All this while performing her superhero duties and keeping the City of Angels free of archvillains such as The Evil Dr. Smog and Baron von Gridlock.

As if all this weren't enough, she's also a published author, with one book to her credit and working on a second. Go for It...Surviving the Challenges of Becoming an Artist is available online at both bn.com and Amazon.com in E-book and paperback. There's also a deluxe coffee table edition for people who don't actually read but like to leave books lying around so people will think they're smart. A quick peak at Amazon revealed that a goodly portion of her music is also available there in both CD (for codgers like me who still like having physical media) and streaming formats. This is not a blatant plug to sell Nora's work, it just seems like one.

Recently, Nora performed with Dee Dee Bridgewater and an all-female band at the San Diego Symphony Series in August of this year. She also performed with Richie Cole, Casey Abrams and the aforementioned Marshall Hawkins at the Idyllwild Jazz Fest. She provided solo violin work for the Emmy-nominated Comedy Central show Drunk History (which sounds a lot like what I do here at AAJ). All this while thwarting an evil plan to steal the Hollywood sign and sell it to the Russians. She's also been singing and dancing, writing articles about the music business, and working on new music. When does she have time for a social life, you ask? That's kind of a personal question, don't you think? While that's none of your business, she is active on social media such as Facebook and Instagram, as well as anti-social media like HermIt and Goaway (nora_f_germain.beatit).

Nora has been called the world's greatest Jazz violinist, and it's not just me saying that. My parakeet echoed the same sentiments, and the bird and I rarely agree on anything. Martin Taylor, an esteemed guitarist who performed with Stéphane Grappelli, characterized her as having "a very wise head on very young shoulders." This is also not a subliminal plug for Head and Shoulders shampoo, if that's what you're thinking.

Even though Nora's career is still in its early stages, in spite of her manifold accomplishments, I still feel like I'm a little late to the party. My friend, the inestimable Carl Hager, did a piece on her for this site as far back as 2013, when she was wrapping up her college career and just dipping her toe in the water of being a professional Jazz musician. Nora herself supplied AAJ with a "Take Five" profile that same year. And no less than the redoubtable C. Michael Bailey, friend and fellow member of AAJ's Southern contingent, reviewed her CD Little Dipper back in 2014. But there's been a lot of water under the bridge since then, in terms of Nora's burgeoning career, so I felt obligated as AAJ's resident Genius to remind everyone of a tremendous talent currently making her invaluable contributions to Our Music. I would mention that she's also beautiful, but I'm already over budget on adjectives in this paragraph.