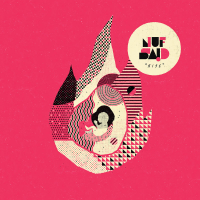 The music of 'Nuf Said is neither jazz nor funk nor soul nor rock. It's all of it and more. This New York-based quintet taps into each of those styles and mixes them all together to create a groove-heavy, stirring brand of music that's all its own.

Rise—'Nuf Said's second album, following My Kind (Self Produced, 2014)—arrives as the band celebrates its fifth anniversary. Vocalist Ioana Vintu and saxophonist Andrew Gould birthed this project and set things in motion back in 2011, establishing a partnership that's still growing and developing. It's their writing and vision that guides this group, and they continue to nourish it and feed it with their creativity and spirit.

As it currently stands, this band is a beat-driven outfit. Drummer Peter Kronreif and bassist DJ Ginyard create the slick grooves, stuttering gestures, and funky underpinnings that power these song vehicles. Guitarist Matthias 'Pedals' Loescher often adds to the compelling rhythmic foundations with his own riffing and effects-laden contributions, Gould's flights feed off of the rhythm section, and Vintu's vocals soar over the mix. That's the story in a nutshell, but it's not so easy to simplify things with this band.

While 'Nuf Said never really abandons those self-established ground rules, and a good number of songs—"Sister," "Nearness," "Ring My Bell"—fit that basic description to a T, there are exceptions to the rules. "On A Darker Moon," for example, takes a more introspective path. Vintu's vocals enter calmly over Ginyard's bass, the band establishes a slow and soulful 12/8 feel, and Gould's soprano muses in the background and girds Vintu's thoughts. That's but one instance where this group moves away from its modus operandi. Another comes in the form of "It's Alright," where Loescher's prickly, African-influenced guitar work sets the scene before Vintu enters over a simmering backdrop. And then there's "Follow," an intriguing marriage between reggae and R&B that eventually abandons both for rock-oriented ambitions.

There may be a rhythm-centered aesthetic here, but you can't pin down the deliciously omnidirectional approach of 'Nuf Said. There's is a sound that abounds with many musical flavors and scents.