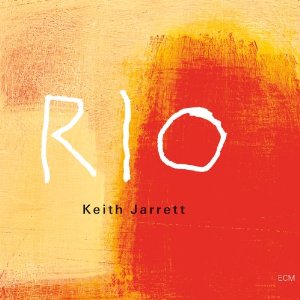 If music is a reflection of where we live, it must also be a reflection of where we are at any given moment. As much as the undercurrent redolent of an artist's home can often be heard, a live performance can equally draw inspiration from where it is, especially if it's a place with its own musical tradition. There's little doubting the intrinsic Americanism of pianist Keith Jarrett on Rio—his first solo piano recording since Testament (ECM, 2009), where two largely dark performances drew on a difficult time in the pianist's personal life—but equally, there's no mistaking the Brazilian joie de vivre that informs this 90-minute concert from April, 2011, turned around with uncharacteristic speed by ECM in just six short months.

That's not to say Jarrett has left the dark side entirely behind. Opening this concert of fifteen improvised miniatures with "Part I," the pianist doesn't make it an easy entry point for his audience, contrapuntal angularities ebbing and flowing with quirky stops and starts and temporal swings and sways, but largely pushing relentlessly forward during its entire 8:40 duration. "Part II" provides welcome relief, though its brooding ambiance remains more closely aligned to contemporary classicism than a specific jazz vernacular.

Things shift with "Part III," however, as Jarrett begins to pull a more definitive song form from the ether, the sound of his stomping foot creating its own rhythmic energy as the pianist builds changes that begin to reflect his South American surroundings, while a passing reference to "As Time Goes By" acts as a foundational motif for the rubato "Part IV." Even as hints of dissonance abound throughout, the mood continues to brighten, as Jarrett demonstrates the encyclopedic knowledge that's always at the core of his muse, though with his stream-of-consciousness approach it's never possible to predict just where that knowledge will take him.

In the case of "Part VIII," it's a buoyancy that could easily be heard in Egberto Gismonti's repertoire, though Jarrett's unfailing melodism is born more of the city than the rougher Amazonian jungles that often inform the Brazilian pianist/guitarist's music. The cascading notes of "Part IX" are closer to the rainforest, however, while "Part XI" returns the pianist to his home, as funky and straightforward a blues as he's ever played.

Since his bout with Chronic Fatigue Syndrome in the 1990s scuttled his well-known continuous improvisational marathons, Jarrett has opted, instead, for a more individual and self-contained approach to solo piano performance. With so many landmark recordings on ECM—ranging from 1972's Facing You to 2006's The Carnegie Hall Concert, with its controversial applause—it's become pointless to assess each subsequent recording in terms of "good, better, best"; instead, each set, carefully chosen from the half-dozen or so shows he does each year, occupies its own space, with its own points of recommendation. Rio, despite some hints of darkness, is a most joyous and lyrical set, and one that finds the perfect nexus of where Jarrett lives and where Jarrett is.