BY EYAL HAREUVENI
February 2, 2013
Sign in to view read count 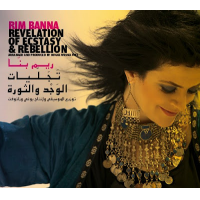 Palestinian singer-songwriter Rim Banna has performed in recent years in Tunis and Egypt, where the the Arab Spring began and where artists took a crucial role in the collective struggle to topple down repressive regimes and politicians. In her tours she sensed the rebellious spirit and wanted to trace its origins in Arabic poetry. Banna chose "Arabic Mystic poems from ancient to modern times, performed in the age of rebellion" of Tunisian, Palestinian, Iraqi and Persian and Andalusian writers in the hope that the ecstatic spirit of freedom and human camaraderie will shine where the light of freedom has not shone yet.

Banna wrote the music for all the poems and was assisted by Norwegian pianist Bugge Wesseltoft who arranged the songs and produced the album. The poems were recorded in Banna's home town (Nazareth), Tunis, Oslo and London with international cast of Palestinian, Tunisian, Indian and Norwegian musicians. Wesseltoft decided wisely to embrace the warm and suggestive vocals of Banna with intimate yet nuanced soundscapes that emphasize her charismatic delivery and the evocative messages of the poems, all sung in Arabic (translations to English are in the liner notes).

Wesseltoft's arrangements reference the great heritage of Arab music but frame it in modern textures that include samples and nu-jazz rhythmic layers. On "The Absent One," by Palestinian poet Rashed Hussein, that describes the disturbing feelings of the Palestinian refugees (and begins with the memorable line: "God became a refugee, sir..."), the emotional reading of the poem is encompassed by gentle fretting on the Arabic kanoon by Palestinian Osama Bishara coupled with an ethereal rhythmic pattern, woven by Wesseltoft and guitarist Eivind Aarset. The same approach is kept also on "The Hymn of the Rain," where the arrangement highlights the impressionistic oud playing of Palestinian Rasmis Kassis and the oriental cello of Tunisian Kays Zarrouk, or on the poem of Palestinian poet Mahmoud Darwish, "The Trace of the Butterfly." Wesseltoft's meditative solo piano playing accompanies Banna's moving reading of the Egyptian sufi poet poem Ibn Al-Faredh, "Supply Me With an Excess of Love."

The angry poem "Don't Increase His Agony" by Iraqi revolutionary and Marxist poet Bader Shaker al-Sayyab, who inspired many modern Arab poets, receives a different treatment. Banna collaborates with Tunisian rapper MR. KAZ and their vocals are rooted in cyclical rhythmic beats created by Wesseltoft and Aarset. Banna is joined on "Astonished By You And Me" by the revolutionary Persian Sufi poet Mansur al-Hallaj and by Tunisian singers Riredh Larousse and Haythem Guediri. Their singing of the chorus turns this hopeful poem into an inspiring hymn about the strength and inspiration that is part of any innocent belief. Banna delivers the text of Tunisian political freedom fighter Amara Omrani, "The Free Man," that was written while he was tortured in the prison, as a rebellious call that draws a clear line between villainous regimes and freedom seeking people. She concludes with the hopeful poem of Andalusian poet and philosopher Ibn Arabi that promises that "the sun of love had appeared in ourselves," accompanied by a reserved piano playing of Wesseltoft.

The Absent One; The Hymn of the Rain; Supply Me With an Excess of Love; The Trace of the Butterfly; The Taste of Love; Don't Increase His Agony; Stranger In the Gulf; Astonished By You And Me; Two Kinds of Love; My Heart Tells Me; The Free Man; The Sun of Love.