By JIM SANTELLA
February 1, 1998
Sign in to view read count 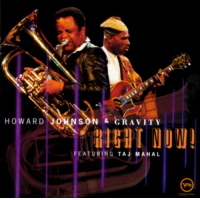 Howard Johnson's six-tuba jazz ensemble Gravity provides a pleasant harmony for each of the arrangements he's included in this new release, and yet they supply varied excitement and expression as well. Backed by a rhythm section of pianist Ray Chew, bassist James Cammack and drummer Kenwood Dennard, the tuba choir draws together with simple charm and alternates their ensemble work with outside stretches from the spirited soloists. Lending distinct tuba voices to the session are Johnson, Dave Bargeron, Joe Daley, Earl McIntyre, Carl Kleinsteuber, and Bob Stewart. Howard Johnson's daughter, tubist Nedra Johnson, guests on one track, and singer Taj Mahal guests on three.

Howard Johnson's early career included work with Gil Evans, Charles Mingus, and Dizzy Gillespie; he organized his first tuba jazz ensemble in New York in 1968. The tuba, in the hands of Gravity's seasoned professionals, covers a broad tonal range; as Johnson states in Right Now! 's accompanying booklet, they play notes "as high as I've ever heard" and "lower than most of us hear." But for the most part, this session is strictly jazz from the mainstream, with a blues-based expressiveness.

Taj Mahal offers the emotional lyrics to "Don't Let The Sun Catch You Cryin' " and scats for one chorus; it's a bop-derived approach that fits logically with Howard Johnson's tuba solo. Showing the same kind of versatility he did for Gravity's last recording, Gravity!!!, multi-instrumentalist Johnson is also featured on the baritone saxophone, pennywhistle, and as a singer. His confident tenor voice introduces Mahal, whose gritty blues vocals contrast appropriately, on "It's Getting Harder To Survive." Johnson's pennywhistle feature on Herbie Hancock's "Tell Me a Bedtime Story" is dramatic; his baritone saxophone is employed in two different settings.

South African composer Caiphus Semanya provided the slow and dramatic "MA-MA," on which the leader's baritone sax moans soulfully and winds its way in the fashion of a human voice. The session's last track, "O Raggedy Man" places Johnson's sax in front of the tuba ensemble with a sound not unlike that of the World Saxophone Quartet. The saxophonist uses slap-tonguing as well as conventional melodic techniques while the tuba ensemble provides a rhythmic shuffle with spirit.

Since five of the tubists spent time in the orchestras of Gil Evans, it's no surprise that his influence is felt here. "Svengali's Summer" is a reworking of Evans' "Summertime" from the Porgy & Bess album which featured Miles Davis. On it, Bob Stewart's solo tuba voice appears quite trumpet-like, while the ensemble renders the familiar orchestral riff from Evans' original score. The second part of the medley, "Waltz," is one of Evans' lesser-known compositions. Done up-tempo and lively, it features tuba solos from Bargeron, Daley, and Howard Johnson. The enthusiasm, soulful expression, and a professional approach to the tuba's role, combine to make Gravity's session welcome for those who appreciate mainstream jazz. Highly recommended.