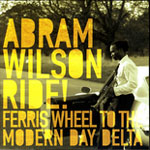 An intact and heritage-conscious American abroad, the Arkansas-born, Louisiana-raised trumpeter Abram Wilson—based in London these past five years—made his debut as leader in 2004 with Jazz Warrior (Dune). The album attempted the difficult trick of addressing both jazz and hip hop, with unconvincing results, and this new set avers that it continues along a similar route. It does and it doesn't—but this time the music is an unqualified success.

Ride! Ferris Wheel To The Modern Day Delta purports to tell the tale of a young musician who rejects his family's multi-generational jazz roots to go on tour with a hip hop outfit, and on whom the new lifestyle proves to be life-threatening. But although Wilson has written brief lyrics for a few of the tracks—and sings them himself in fine style—almost all of the action takes place off camera. The music is unencumbered by, and stands up magnificently without, any linear narrative structure.

There is also precious little hip hop outside the plot scenario and in the grooves. Practically none, in fact. Instead, Wilson has gone back in time to mix modern straight-ahead jazz with New Orleans marching band music and the Crescent City funk of Dr John and Professor Longhair. The result is strongly reminiscent of bassist/composer Charles Mingus' soul stirring jazz and blues gumbos like Blues And Roots (Warner Bros, 1959) and The Black Saint And The Sinner Lady (Impulse, 1963), with an added shot of Delta blues thrown in for good measure.

The ten musicians featured on Ride! are drawn from three performing outfits: the Delta Blues Trio, which contributes the excellent harmonica player Errol Linton and guitarist Giorgio Serci; the Londorleans Brass Band, from which trombonist Michael Mwenso and tuba player Andy Grappy are Mardi Gras delights; and Wilson's working sextet, which retains the deliciously visceral saxophonists Patrick Clahar and Nathaniel Facey, plus Tomorrow's Warriors graduate and drummer Shaney Forbes, from Jazz Warrior. All the above keep the skillet hot and greasy, with solid support from pianist Ben Burrell, who plays a strong pair of block-chording hands, and the muscular but supple double bassist Neil Charles.

If the album lacks a little light and shade—though the trio of tracks culminating in the tender-themed "You Already Home" are more boppish and light-footed than the energetic R&B infused workouts which dominate the set—the music, and the listener, remain engaged throughout. A particular pleasure is the close to twelve minutes-long "I Want It All," a superb latter day evocation of Mingus' soul brother groove.