By John Kelman
November 9, 2005
Sign in to view read count 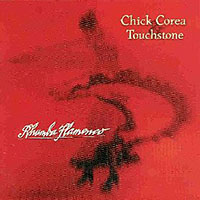 Chick Corea's recent ten-DVD release, Rendezvous in New York, is a comprehensive look at his acoustic jazz projects over the past four decades, but anyone following his career knows it only paints part of the picture. And it's not just the complex rhetoric of Corea's fusion efforts, like Return to Forever and the Elektric Band, that complete the picture. Latin music has long been a key element in Corea's music. Return to Forever, in fact, began as an examination of Latin music before turning more electric, aggressive—and popular.

Corea's interest in Spanish music was well documented on My Spanish Heart (Polydor, 1976), and he continued to place his own slant on it with Touchstone (Stretch, 1982)—a mixed bag that included two tracks with flamenco guitarist Paco De Lucia and De Lucia's bassist Carles Benavent. Two decades later, while on tour in Europe, Corea found himself reacquainted with Benavent and two other De Lucia alumni—saxophonist/flautist Jorge Pardo and percussionist Rubem Dantas. From this chance meeting emerged a new project, Touchstone, with a European 2004 tour the source for Rhumba Flamenco: Live in Europe.

My Spanish Heart is a precedent for Touchstone, which also includes longtime Corea collaborator Tom Brechtlein on drums. But this quintet has a stronger affinity for the rich intricacies and rhythmic subtleties of the Spanish—and specifically flamenco—roots of Corea's compositions than the core group of My Spanish Heart. And the acoustic nature of Touchstone realizes a more fundamental link to its source's organic style.

The writing on this double-disc set represents Corea's most successful marriage of improvisational freedom with longer form composition. Informed by the broader latitude and suite-like nature of classical composition, Corea assimilates writing styles honed on My Spanish Heart and other albums from that era, including Friends (Polydor, 1978) and The Leprechaun (Polydor, 1975)—even the final incarnation of Return to Forever that toured and released Live (Columbia) in 1977. But while those albums had much to recommend, they also leaned towards a sort of bombast that is wholly absent on Rhumba Flamenco.

That's not to say there isn't plenty of vigorous, virtuosic playing to be found here. Benavent is stunning throughout, the perfect combination of rock-solid anchor and fleet-fingered soloing, with a chordal approach that connects directly to the flamenco tradition. Pardo, a fine saxophonist, is an even more compelling flautist, as imaginative as Corea's RTF band mate, the late Joe Farrell—but, like Benavent, more purely tied to the Spanish tradition. The brief appearance of singer Gayle Moran Corea is the only misstep. Her purity and remarkable range mesh beautifully with Pardo's flute on "Touchstone ; however, her take on the old RTF song "You're Everything may be technically perfect, but it lacks Flora Purim's evocative resonance.

Corea is incredibly busy these days, reinventing past successes on new projects like the forthcoming The Ultimate Adventure, which teams him with a wealth of collaborators past and present. With Touchstone as the basis, and Rhumba Flamenco the vital seed, expectations for the early 2006 release are already high.

Rhumba Flamenco is only available through Chick Corea on the web.