Maximize your visibility at All About Jazz by upgrading your musician page from standard to premium. With it, you'll receive All About Jazz home page exposure, a highly stylized / ad-free musician page with bonus features and benefits, an ad, plus you control where you sell your music and so much more.
Learn More
264 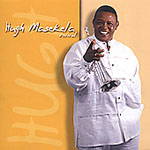 Hugh Masekela, 66, sings and plays his horns on Revival with the same spirit that drove his worldwide commercial success nearly forty years ago. His flugelhorn and cornet still have that smooth sound: a bit frail, but always filled with seamless phrases that bounce fluidly along a trail that's easy to latch on to. This time out, he sings the lead vocal part in a concert that folds in South African elements of a contemporary nature.

Masekela wrote "Spring" to remind us how the earth's cycles provide comfort and joy. He sings it as a happy folk song and adds a heartfelt cornet solo to imprint its message thoroughly. Simple and straightforward, his musical sign of love rests casually on laurels that he founded long ago. With cornet, he revives his "Grazing in the Grass" sound on "District Six," which features vocalist Corlea with a South African choir. Together, they provide an uplifting example of the positive outcome that can reflect on the arts when politics stays out of the way. Masekela's updated cultural tour catches on rapidly, like wildfires swallowing up unsuspecting flora. His music mesmerizes.

Throughout much of the album, however, the trumpeter's tone and emphasis remain weak. His vocalist guests take center stage, as Masekela weaves in cornet and flugelhorn melodies behind them. The full force of his flugelhorn tone remains hidden and a bit off the mark. This revival of South African music does not revive his tone and technique. Nor does his singing add anything musical to the tour. Nevertheless, Masekela's heartstrings are showing, and you can't help but love the warmth that he endows on his country's cultural change.

After Tears; Woman of the Sun; Spring; District Six; Open the Door; Nontsokolo; Fresh Air; Smoke; Ibala Lam; Sleep; For the Love of You; Working Underground.