By Troy Collins
November 13, 2014
Sign in to view read count 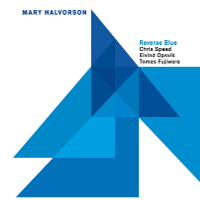 In the past few years, Mary Halvorson, already an acclaimed member of New York's Downtown improv scene, has been earning widespread recognition as a bandleader and composer of note. Her writing displays an increasing sophistication with each new effort, revealing a compositional maturity as distinctive as her idiosyncratic guitar technique.

Her latest ensemble, Reverse Blue, first performed at NYC's Blue Note as part of Search and Restore's "Spontaneous Constructions" series. The group's name was inspired by her father's curious habit of filling notebooks with song titles that often contain the words "reverse" and "blue." Splitting writing duties with her bandmates on the quartet's self-titled debut, Halvorson is responsible for half the pieces, while credit for the remainder is spread evenly amongst woodwind player Chris Speed, bassist Eivind Opsvik and drummer Tomas Fujiwara. Despite their mixed pedigree, there is an aesthetic similarity amongst the tunes that lends a sense of stylistic cohesion to the proceedings.

The labyrinthine title track is archetypal; its intervallic theme is extrapolated by Speed and Halvorson in turn, abetted by the rhythm section's adroit modulations. Much of the album follows suit with similarly oblique mid-tempo numbers, although there are a few dynamic detours, like the serpentine "Rebel's Revue" and the bristling opener, "Torturer's Reverse Delight." Halvorson and Speed engage in taut counterpoint on the latter, with keen support from Opsvik and Fujiwara, before the song transitions into grungy, metallic riffing, culminating in a scorching duet between distorted guitar and drums.

Conversely, Speed's "Really OK" is the set's most conventional offering, a bluesy waltz-time swinger that spotlights the melodic invention at the heart of Halvorson and Speed's spirited rapport. Even more straight-forward is the atmospheric ballad "Hako," a showcase for Speed's lyrical tenor, while the enigmatic closer, "Resting on Laurels" builds dramatically from hushed silence to roiling expressionism before fading back into the ether.

Opsvik and Fujiwara are a galvanizing force throughout the date, underpinning Halvorson and Speed's tortuous interplay with pliant rhythms. On the frontline, Speed's sinuous clarinet is even more impressive than his breathy tenor, but it's the beguiling intricacies of Halvorson's protean fretwork that are most unique. Bending notes with a Line 6 delay unit controlled by a volume pedal, Halvorson's unorthodox approach yields a kaleidoscopic color palette that informs her freewheeling improvisations as readily as her rarefied compositions.

Cohesive, yet varied enough to signify its collaborative nature, Reverse Blue is another exceptional release from one of today's most adventurous artists.