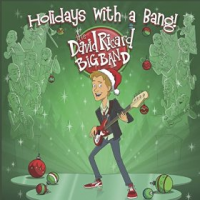 Bang! is an apt description of David Ricard's approach to big-band endeavors in general and holiday music in particular. The bassist / arranger's talented ensemble comes out swinging hard on Holidays with a Bang! and keeps its collective foot on the accelerator throughout this charming laundry list of well-worn seasonal favorites given a fresh new appearance thanks to Ricard's burnished arrangements.

The album's four "bonus" tracks showcase vocalist Aubrey Logan (who doubles on trombone) with a smaller group comprised of Nudell (tenor sax), Hornbeck, Seigel, Ricard and drummer Satoshi Kirisawa. They are engaging in their own way, with the ensemble cheerfully gamboling its way through "Jingle Jangle Jungle," a reprise of "Auld Lang Syne," "We'll Wrap It Up on New Year's Eve" and "Jingle Bell Waltz." The band is topnotch, and Ricard has shown in less than a year that he's a rising star in the undersized realm of big-band arranging. Whatever your seasonal plans, Holidays with a Bang! is neatly designed to get them off to a swinging start.