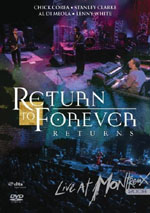 With one of the most successful tours of 2008 behind it—and the two-CD set Returns (Eagle Records, 2009) released to document the event—the reunion of fusion powerhouse Return to Forever— keyboardist Chick Corea, guitarist Al Di Meola, bassist Stanley Clarke and drummer Lenny White—appeared to be over. No surprise, however, that the group's triumphant performance at the Montreux Jazz Festival was also recorded, and now sees release a year after the tour began. Impeccably recorded with a multi-camera crew, and featuring a number of audio options, it's the perfect document of a tour that brought unexpected mass popularity back to fusion.

For those who were at any of the shows beyond the first few, when the band was still honing its setlist, Returns: Live at Montreux holds no surprises. Beginning in flat-out, pedal-to-the-metal mode, after a brief introduction the group launches into Corea's title track from 1973's Hymn of the Seventh Galaxy (Polydor), where Di Meola demonstrates both the high octane playing he's been known for since being recruited for the group in 1974 at the age of 19, and a newfound sense of space that allows even his most fiery solos to breath. Clarke's enduring "Vulcan Worlds," from Where Have I Known You Before (Polydor, 1974) follows, complete with the staggering unison lines, complex arrangements and, in a shift from the original, a half-time solo spot for Clarke that features tastes of material from his own discography, including "Lopsy Lu," from Stanley Clarke (Epic, 1974) and "Silly Putty" from Journey to Love (Epic, 1975).

The electric portion of the set concludes with an extended version of White's "Sorceress," from Romantic Warrior (Columbia, 1976), with a greasy, hip hop-centric middle section, and Corea's epic, Spanish-tinged "Song to the Pharoah Kings" from Where Have I Known You Before, where Corea and Di Meola trade some serious chops, bolstered by Clarke and White's relentless groove.

Watching the group is a different experience from just hearing it. While all the muscle-flexing, testosterone-rich playing is still upfront, so, too, is a greater maturity. White's playing is no less impressive than it was 35 years ago, but he's hitting the kit (for the most part) much more lightly, letting its rich tone shine through far more than it did back in the day. With advances in technology, Clarke's bass is both brighter and deeper than it's ever been, and while his electric solos are nothing less than staggering—and clearly the precedent for players like Marcus Miller and Victor Wooten—it's his acoustic work on his "El Bayo de Negro" solo that's most impressive. His acoustic technique has always matched his electric, but it's rarely been heard so closely together as it is on the DVD, and it's a strong setup for his own recent acoustic trio disc with White and pianist Hiromi, Jazz in the Garden (Heads Up, 2009).

Corea's synth tones—always a weak point with the original Return to Forever as being thin and, well, a little cheesy—have more weight now, and while he references the tones of years past, he's expanded them to make them more relevant to today.

The balance of the Montreux set is an acoustic excursion through the title tracks to No Mystery (Polydor, 1975) and Romantic Warrior, with lengthy solo features for everyone worked into the 50-minute, near-continuous second half of the show. With the solos somewhat abbreviated from those heard on the Returns CD, it works a little better by avoiding some of the CD's excesses. Still, while there are plenty of similarities—Di Meola's duet with Corea of Hymn of the Seventh Galaxy's "Space Circus, Part I," for example—there are omissions as well—Clarke and White join Corea during his "Friendship" solo, but it's not "Solar" upon which they converge.

Odd, as well, is that the Montreux performance omits the usual encore of Romantic Warrior's high octane "Duel of the Jester and the Tyrant," although it can be found in the bonus section of the DVD, which includes longer versions of each members' solo segments as well as "Duel," all taken from the U.S. leg of the tour, and stretching the DVD's total running time to nearly two-and-a-half hours.

As well-filmed and mixed as the DVD is, it's the perfect companion to the Returns CD set, the two creating the ideal companion for anyone who was at one of Return to Forever's 2008 performances. For those who weren't, the two combine to provide an essential document of what they missed. The audio Returns may be a more complete show from start-to-finish, but Returns: Live at Montreux 2008 provides more of the "you are there" feeling, especially on the bonus tracks, which provide multi-angle views of the group. Return to Forever may never reconvene again (based on comments from Di Meola, it's highly unlikely), but the two-punch of Returns and Returns: Live at Montreux 2008 provide the live document of this group that was never made back in the day.