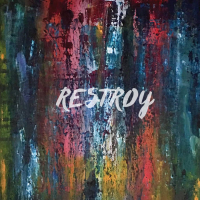 Between the constellations of Sun Ra and Miles Davis, Restroy has claimed a corner of the universe. On its self-titled debut album, the group explores the far-out possibilities of a sextet. placing electronics alongside acoustic instruments, and wrenching all the potential sounds from that combination.

The keyboards and synthesizers shimmer like a vast sun-baked plain, the trumpet a stark contrast of emotional concentration. Wielded brilliantly by James Davis, his playing is precise, refined, almost blinding in its radiance. But just when it seems certain that Davis wears a halo, he stomps on the electronic ring modulator. And the resulting ungodly noise is thrilling as sin.

Four of the seven tracks were composed by bassist Chris Dammann, and it's on these pieces that Restroy finds a middle ground between experimentation and coherency. On "Close," the first Dammann composition on the tracklist, his bass playing is reined-in, providing the underpinning hook. Avreeayl Ra's chiming cymbal-bells widen the open spaces of Mabel Kwan and Paul Giallorenzo's keyboards. Restroy is a cavernous album. Where Sun Ra's Arkestra filled every square inch of air/headspace with improvisations, rhythms and sound, the keyboards here create a sense of ever-stretching infinity, as if the horizon has been put on the rack.

"Apart" gallops along on a low, angry synthesizer bass line. Again, it is the low-end that catches the attention, the bait on the line. Atop its unwavering foundations, Davis' trumpet glides. Before all traces of his angelic performance vanish in a cathartic blast of noise. A juxtaposition that asks questions about our definitions of "beauty."

Where beauty is conventionally defined as "pleasing the aesthetic senses," Restroy and other experimental albums transcend those limitations. These "difficult," albums are beautiful not for any pleasurable qualities, but for their communication of ambitions and emotions. For their evocation of often forgotten or neglected human aspects.

The churning waves of sound on "Apart," are a release of our pent-up ugliness. Elsewhere on Restroy there is conventional beauty. However, it is always contrasted against something base—a jagged piano cluster or brutalist electronics. As on "day destroys the night, night divides the day," these opposing forces battle for attention and the airwaves. But neither ever wins.

It's that battle that makes Restroy so compelling. While Davis' trumpet heralds the angels, Dammann's bass rumbles like the belly of Hell. The sextet moves between the heavens and the pit, often in the space of a bar. And record what they find on their journeys.

A Line And A Point; Close; Many Exiles; Thread; Apart; Grids; Some Things Simply Disappear.