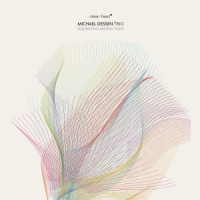 Michael Dessen is a slide-trombone virtuoso and computer musician of the highest order, and the music his trio crafts on Resonating Abstractions showcases his work as a composer in compelling fashion. Key to this success are the contributions from singular double-bassist Chris Tordini and the multi-rhythmic drums of Dan Weiss. Together they realize and expand the structures of Dessen's vision, aided by the live-sampled or algorithmic electronics on roughly half the tracks.

"Grid After Grid," opens with Dessen's soft blustery blowing over Tordini's raw, deceptively elemental lines—everywhere there are ghost-like traces of the blues—absent any obvious references. Dynamics are handled with masterful flow, squall-to-hush, roar-to-murmur. Tordini emerges with a huge, woody resonance, striking some tones that cut through tissue and bone.

The electronics surface on the aptly titled "Organic and Unnatural Objects," a wild trombone-triggered nightmare and "Ignite," a feature for sputtering, stuttering blips and the cyclic fusillade of Weiss.

Dessen's plaintive, yearning melodies seem to trigger primal memories from a distant past, as on "The Infinite and the Invitation," where the force of his imagination connects with the unknowable. "While in the Subterrain," is Tordini's solo moment—featuring speaker-splitting guttural fragments and deep indigo moans.

"Where Does the Time Go," festers with violent, turgid rhythm stabs and live-sampled bone-doubling that skirts very close to a boiling sonic alchemy before dissolving into a superb vignette between bass and drums—veering finally into a hypnotic, pedal-toned meditation, flowing seamlessly into "To Make Real," an acoustic trio bristling with agitated energy, manic bass repetitions and waves of percussive assaults that turn into a prolonged exchange of hushed asides.

The computer-embellishments on Resonating Abstractions build on the trio's core-strengths as interpreters and improvisers, expanding the music and introducing wild-card elements of tension, but even the raw, unadorned acoustic trio weaves a full sonic curtain that sings, roars and rattles across the frequency spectrum.

Anyone curious about the state of the art in trombone improvising needs to investigate Michael Dessen, and Resonating Abstractions is a great place to start.

Grid After Grid; Organic and Unnatural Objects; Ignite; The Infinite and the Invitation; While in the Subterrain; Where Does Time Go; To Make Real.