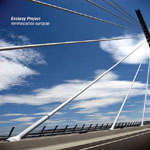 The jacket photography of Reminiscence Europae shows what looks like a bridge by architect Santiago Calatrava, which is appropriate. His global works divide opinion and are impossible to ignore. His architecture is largely devoid of local cultural reference; he is the architect without borders. In a way, these photos are a suitable metaphor for the music of Polish group Ecstasy Project—seemingly simple yet technically impressive and austere. According to taste, it is perhaps beautiful, and with few obvious points of departure.

The Italian song titles and chamber ensemble sobriety that dominate these live recordings allude to a classical approach, but the violin of Lukasz Gorewicz (the main voice of the group) comes from somewhere between the melancholia of eastern European folk and the animated style of violinists Jean-Luc Ponty and Jerry Goodman. The vibe playing of Pawel Nowicki is utterly minimalist, atmospheric in a Joe Zawinul-esque way, and evokes a Twilight Zone eeriness. Underpinning this esoteric face is the compelling drumming of nominal leader and main composer Rafal Gorzycki, which carries an energy and force in contrast to the edgy minimalism around him.

The pieces have a modern, avant-garde feel to them—soundtracks to European art-house cinema. The manipulation of space and silences, which lend such force to the infrequent eruptions of drums, violin and flute, are shaped by the minimal utterances of Pawel Nowicki's vibes, quietly rumbling drums, Pawel Urowski's alternately sparse and lively double-bass, and tense violin notes which are more percussive than melodic. But there is momentum to this music; the innate tension in the short staccato phrasing and the abstractness and dissonance, rises imperceptibly to crescendos that are surprising in their intensity.

On "Presto Cinque," violin and flute trace the initial lyrical melody before Gorewicz takes solo flight. Drums and bass propel the violinist into some inspired playing on a heady segment that evokes the Mahavishnu Orchestra. A brief, silent interlude follows, broken by a circular vibes motif, before Tomasz Pawlicki's flute takes center stage, the notes unfurling progressively and becoming bolder as crashing cymbals fill the air. Pawlicki's playing becomes gradually freer and breathier as the piece reaches a climax, and the guttural cry that escapes his throat reveals the influence of Rahsaan Roland Kirk, or perhaps Ian Anderson—comparisons that do not flatter him at all.

The combination of vibes and drums creates dense soundscapes on "Maestoso non troppo." "Adibitum" glides from bowed bass and violin in harmonious tandem to blistering drums to near silence impregnated by softly chattering vibes. This is music in a constant state of ebb and flow.

An accompanying DVD shows this lineup in concert, but the absence of its more animated tracks, featuring exhilarating violin and flute improvisations, provides only half the picture. The dark and edgy minimalist approach of Reminisence Europae holds a certain fascination precisely because of that juxtaposition of rationed and unrestrained improvisation. Nevertheless, admirers of modern, progressive music will not be indifferent to this challenging, original project.