Jan Garbarek / The Hilliard Ensemble: Remember Me, My Dear

By Mark Sullivan
November 5, 2019
Sign in to view read count 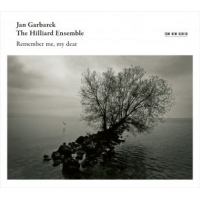 When Norwegian saxophonist Jan Garbarek first collaborated with The Hilliard Ensemble (a British vocal quartet that specialized in early music) it was an experiment, done at the suggestion of ECM founder/producer Manfred Eicher. No-one anticipated a huge crossover hit, but Officium (ECM, 1994) was so successful that it was followed by Mnemosyne (ECM, 1999) and Officium Novum (ECM, 2010). Remember Me, My Dear is taken from 2014 concert recordings, made during the year that the Hilliards disbanded.

So this is the ultimate record of their collaboration, a potentially final document of the union they achieved. At its best Garbarek's saxophone became a fifth voice in the ensemble. It opens the concert with "Ov zarmanali," exploring the massive acoustic reverberation of the Swiss church which hosted the concerts before being joined by a gentle pillow of wordless vocals. This piece was also the opener on Officium Novum, a modern composition by Armenian composer Komitas. Before revisiting selections from all three of the previous albums, "Procurans odium" introduces a new piece, an anonymous medieval song.

"Allting finns" is the first of two Garbarek compositions, along with "We are the stars," which Garbarek first recorded with a choir on his album Rites (ECM, 1998). Both are a perfect stylistic fit with the more traditional music in the program. Garbarek's compositional voice blends just as effortlessly as his instrumental one. Contemporary Estonian composer Arvo Pärt's "Most Holy Mother Of God" is performed by the Hilliards alone. Garbarek sneaks in on the final chord, leading directly into the anonymous early music of "Procedentum sponsum."

Other highlights include Pérotin's "Alleluia nativitas," which features a very modern-sounding saxophone solo over a repeated vocal vamp, and Hildegard von Bingen's "O ignis spiritus," which finds Garbarek weaving around the polyphony of the voices. No doubt fans of the previous collaborations will want this one, and it is also an excellent introduction. While it is not the first live concert recording by the collective, it documents their most fully mature performance on record.

About Jan Garbarek / The Hilliard Ensemble