By John Eyles
September 1, 2001
Sign in to view read count 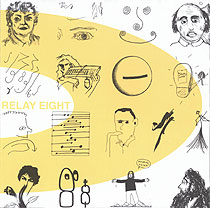 Relay Eight? Wasn't their last release called Relay III? What is happening? Well, Relay is not a group or band. It is an event that happens in London as part of the Stoke Newington Festival each June. This release dates from 2000, the eighth such event. Relay III recorded the 1995 event. Others have not (so far) been documented on CD. All clear?

Although seventeen performers are credited here, Relay is organised so that they play as a constantly evolving series of trios or quartets. Every fifteen minutes or so, a new player joins and another leaves. (You can see why it is called Relay.) This avoids the clutter that can hamper large group improvisations, and also ensures constant variety. However, it also means that there is not the time for any one trio to get into an extended improvisation.

The CD starts with the sound of the audience; that is right and proper, as Relay is as much about them as about the performers. Mainly, they are not an audience committed to improvised music, but festival-goers who pass in and out of the performances, often out of idle curiosity. Among the performers, this can encourage a greater sense of populism than is common in improvised music. So, we are suddenly given a rendition of "Old McDonald's Farm" on violin. And at one point there is an impromptu vocal performance—"Natty dread, natty dread, natty natty"—that is probably a passing member of the public. (There are no detailed credits of who performs on each piece.) Overall, in the spectrum of improvised recordings, Relay definitely lies at the light-hearted end. However, there is also some fine, pithy improvised music in here. How could it be otherwise with such an experienced array of improvisers available?