By JOHN KELMAN
February 8, 2009
Sign in to view read count 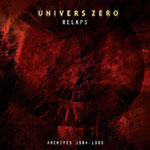 It was tough times in the '80s for experimental/progressive music. Punk/New Wave had virtually decimated popular interest in the more complex music of '70s groups like Van Der Graaf Generator, Gentle Giant, and Henry Cow—groups that failed to survive into the new decade; live work was hard to come by; and major label support had gone the way of the dodo.

Belgium's Univers Zero never had the benefit of a major label, though that was probably just as well as it's unlikely, even during progressive rock's heyday, that this largely dark and foreboding group would have ever cultivated the support of more audience-friendly groups like Genesis and Yes. Still, after building a cult following on the basis of early albums including its remarkable 1977 debut, Univers Zero (reissued 2008, Cuneiform), the early '80s found drummer Daniel Denis' group with steadily decreasing work and zero label interest in releasing what new material it managed to document in a recording studio—though Cuneiform would ultimately rescue and reissue an expanded version of UZ's 1983, Japan-only EP, Crawling Wind, in 2001.

Still, though UZ's 1984-1986 line-up would go through some drastic changes, including the temporary loss of keyboardist Andy Kirk, who was one of UZ's principal writers along with Denis, it managed to survive the lean times, as documented on Relaps: Archives 1984-1986. A collection of live shows (two from 1984, one each from 1985 and 1986), it features early versions of material that would ultimately surface on UZED (Cryonic, 1985; later Cuneiform, 1988) and Heatwave (Cuneiform, 1987), but with some significant differences.

Ever brooding and bleak, Relaps' largely chronological sequencing further clarifies the group's evolution, already documented on UZED and Heatwave, especially with the swirling, pulsing and occasionally dervish-like music of the septet.

Two versions of "L'Etrange Mixture du Docteur Schwartz" bookend Relaps—the first, a more faithful, albeit harder-hitting version of the version found on UZED; the second a "free-style" version that proves UZ always was, at least in part, an improvising band and that even its complex writing could be opened up to greater possibilities. Still, Relaps' most impressive track Relaps is an 18-minute version of Heatwave's "The Funeral Plain" that, with the combination of two keyboards, clarinets, strings, bass, drums, and electric guitar, builds with the inevitability of a bolero, albeit through a series of movements, towards its relentless and cathartic climax, complete with Michel Delory's screaming guitar and Denis' thundering percussion.

The markers of early UZ remain—a confluence of unorthodox instrumentation and classical references that range from renaissance to contemporary—but Relaps leaves little doubt that, despite a soon-to-come 12-year hiatus until the revived group's The Hard Quest (Cuneiform, 1999), Univers Zero of 1984-1986 was more hard-edged and even rockier than it had been in the '70s, drawing a clear line from its earliest days through to its most recent Live (Cuneiform, 2006).