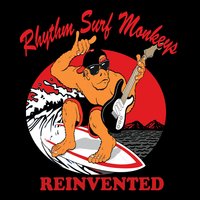 The Rhythm Surf Monkeys' new album Reinvented is a collection of powerful rock tracks imbued with AOR, blues, and jazz elements. There is no song-skipping on this one. Every track has a compelling message, engrossing music, and pervasive appeal. The brainchild of songwriter/guitarist Jim Hiltz, the band has created an album that will reverberate in the minds and hearts of its listeners.

The CD kicks off with the title cut, a crackling opener that is a toe-tapper from the first strum of the electric guitar. Megan Wheatley's powerful voice adds bluesy grit to the track. It's one of those songs that will keep adrenaline running high from beginning to end. The high-octane lead guitar solo is dynamic and bold, and the energy in this song is sustained until the last note. The hooks are fresh and invigorating.

A few bars in and some would think that "Pen of Cowards" is a Creed song with its hypnotic lead intro. Part haunting, part mysterious, this song contains a strong message. It opens with "A name without a face/A thousand friends you've never met/Cast your stones/From the shadows." Steve Kilgallon's voice is poignant but commanding. From a slow enigmatic start the track intensifies as it seems to break its own barriers with its ferocious beats and fiery strums. It then cleverly pulls back in the end to a satisfying close.

"I Forgot Who I Am" is jazz fusion at its finest. This upbeat song managed to strike the balance in forging the robust rock tunes with the relaxing jazz vibe and the rhythmic blues beats. Both the trumpet and lead guitar had their respective shining moments within the song, showing that the rock and jazz genre are compatible without overpowering each other. This one is a certified ear candy.

One thing that is worth noting about this album is the compelling narratives of Hiltz. Each track tells a story and in today's music industry, that attribute has become a rare gem. This album has nuggets of impeccable songcraft scattered all throughout its tracks like rough diamonds waiting to be discovered.

Reinvented; Pen of Cowards; I Forgot Who I Am; Prospect Avenue; Paid My Dues; The Old Soldier; So Many Times.

About The Rhythm Surf Monkeys