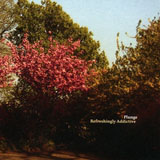 Recorded live in the studio in front of an audience, Refreshingly Addictive is the third release by this exceedingly intuitive group, following Plunge (Kopasetic, 2004) and Plunge With Bobo Stenson (Kopasetic, 2005).

The sequence of albums shows the trio gaining confidence in themselves and each other, as they gradually strip away the extraneous, unearthing and burnishing the core of their musical personalities. The resulting music is very exciting, introducing drama into the cerebral and keeping the listener within a recurring cycle of anticipation followed by resolution.

The music is completely improvised by the trio, except "Involvement," which is a solo by drummer Peter Nilsson. On this album, saxophonist Andreas Andersson sticks to baritone saxophone while staying most of the time in its upper range. Although Andersson is the natural leader due to his instrument, Nilsson and bassist Matthias Hjorth do not simply react, but instead surround Andersson with an elastic sound field that allows any player to take the lead.

The first, and title track is a complete example of the band's real-time methodology, the high level of group interaction that has been achieved and the coherence created over time. The thematic material is simple, being a scale fragment of a minor third that sets a tonal center. Starting arrhythmically, the theme is repeated by Andersson as Hjorth and Nilsson comment underneath, creating an introductory feel while solidifying the thematic material.

Slowly, as the tension level is gradually increased, a pulse is introduced and the development of the theme begins. The group sound—anchored by the Nilsson's huge cymbal splashes and gong hits, and Hjorth's close listening to Nilsson—is both mysterious and exciting, allowing Andersson to go where he wishes. Nilsson begins to assert himself, getting louder, as he challenges Andersson, who responds with an intense simplicity.

This is music making of the highest caliber, and it's possible to hear the spontaneous being manipulated with a constant eye peeled towards creating structure, all in real time. Putting this track first is a double-edged sword since, while it grabs the ear immediately, it also raises expectations.

"Chant" is freer in that a pulse is never maintained. Sounding a bit like Francois Carrier and Michel Lambert in the way Andersson develops his quasi-tonal theme, closely followed by Hjorth and Nilsson, structure is developed and tension rises and falls, albeit in a different manner than the previous track.

Dropping to the bottom of the baritone for the closing "None Of The Above," Andersson once again keenly balances the free, the melodic and the tonal, and the tension/release dynamic created by the band is wonderful, creating the perfect bookend with the title track.

Creative improvised music does not get much better than Refreshingly Addictive.