By Jeff Dayton-Johnson
June 3, 2007
Sign in to view read count 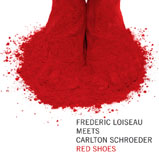 In a recent AAJ interview, pianist Guillaume de Chassy called guitarist Frédéric Loiseau the "French Jim Hall." Without belaboring the comparison, the piano- guitar duets on Red Shoes are less the French version of Hall's recent, excellent duets with Geoff Keezer on Free Association (Artist Share, 2006) than the Gallic equivalent of Undercurrent (Blue Note, 1962), the guitarist's fabled encounter with pianist Bill Evans. Clean, limpid lines; a mise en scène conducive to reverie; a visceral rhythmic accompaniment: these are the features of that Blue Note date, and of Loiseau's playing, that de Chassy presumably was talking about.

On Red Shoes, Loiseau and California pianist Carlton Schroeder, his former teacher and one-time sideman with Mel Tormé, Sarah Vaughan and others, alternates between four standards and four originals. The title track, however, is not a version of the Elvis Costello song, but sounds like a variation on "J'ai ta main," as played by the aforementioned de Chassy and bassist Daniel Yvinec on their duet record Chansons sous les bombes (Bee Jazz, 2004).

Loiseau and Schroeder are not afraid of pungent, oft-recorded classics. Take "Body and Soul": journalist Gary Giddens once wrote an essay about the tune, for which he claimed to have reviewed over ninety versions. On the Red Shoes version Schroeder's soloing is stately and magnificent, but ever-so-decadent as well: music to which the vaguely depressed protagonists of a Douglas Sirk movie might sip their Old Fashioneds. My tastes run in that direction, sometimes; even if yours don't, however, you will savor the bluesier tinge lent by Loiseau toward the end of the number.

"Here's That Rainy Day," meanwhile, slows the tempo to the point where the melody barely coheres, the way pianist Ivo Pogorelich approaches the Chopin nocturnes, or Betty Carter any number of songs including "The Man I Love," from Look What I Got! (Verve, 1988), or "Body and Soul/Heart and Soul," from Finally! (Blue Note, 1969).

Overall, Loiseau's virtuosic playing possesses a kind of hard-edged bluesy quality that remains coolly elegant; a characteristic that, in general, suffuses Red Shoes in its entirety.

Sunny Side For Fred; Here's That Rainy Day; Derri