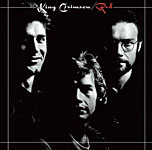 With numerous "definitive" editions already out, what can one more kick at the can of progressive rock progenitor King Crimson's discography offer? Plenty. With the entire Crimson catalog being remixed, remastered, and offered as CD/DVD-A sets that include stereo and 5.1 surround remixes in MLP Lossless, PCM Stereo, and DTS 5.1 formats, based on the first two 40th Anniversary Series releases—1975's Red and 1969's seminal In the Court of the Crimson King—they've simply never sounded this good. With added audio and video bonuses, it's safe to say that, even for the most cynical fan, these will truly be the definitive and essential editions.

ItCotKC shook the music world, but Red is, perhaps, Crimson's most broadly influential album. The crunching, mixed metered instrumental title track, presaging the Nuevo metal movement by decades—finally possesses the punch and clarity it's been waiting for. Porcupine Tree's Steven Wilson works together with Crimson co-founder/guitarist Robert Fripp—the only remaining original member in the occasional periods where Crimson again becomes a going concern—to give Red a sound that's both updated and reverent to the original. Even the most committed Crimhead will find little to fault in their choices, with an expanded and enriched soundscape that, in the surround mix, takes greater advantage of the rear channels than, say, Genesis' recent remixed remasters.

Red signaled the end of a six- year stretch with a revolving door of personnel, and was an album of consolidation, balancing the title track's metal-tinge with the more symphonic concerns of "Starless"—also featuring one of Fripp's most restrained yet effective solos to date. "Providence," culled from a longer improvisation included as a bonus track, proves 1972-1974 Crim—vocalist John Wetton's thundering bass, drummer Bill Bruford's unmistakable precision and, prior to his being axed from the group, violinist David Cross' often undervalued contributions—to be its most fearless to that point, a true force of nature when combined with Fripp's increasing guitar dominance.

"Fallen Angel" and "One More Red Nightmare" remain songwriting pinnacles for 1972-1974 Crim and, with Bruford's kit sounding as crisp and visceral as it was always meant to, they finally emerge unscathed from their originally muddy, two-dimensional sonics. With another Crimson co-founder, saxophonist Ian McDonald, back in the fold as a guest and rumored to have been asked to rejoin before Fripp summarily brought the group to a halt, who knows where things might have gone?

As if a vastly improved Red weren't enough, the DVD also includes a four-song, 30-minute live 1974 performance from French television. The visual effects may be dated and the sound mono (but crystal clear), but with so little official footage of 1970s-era Crimson available, this is manna from Crimson heaven. A gently improvised intro to the symphonic ballad "The Night Watch," along with the group's powerful performance of "Starless," is worth the price of admission.

Released almost back-to-back, Red and ItCotKC (the latter, receiving special, even more expansive treatment) bode well for the rest of this 40th Anniversary Series, expected to be out within the year. Bring 'em on!