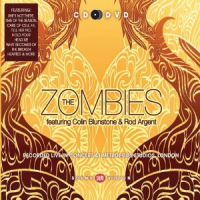 Indeed, a commemorative occasion for this classic British pop band, performing in front of an intimate audience at Metropolis Studios in London. Featuring original members, vocalist Colin Blunstone and keyboardist Rod Argent, The Zombies perform its cherished, harmonically attractive hits while tinting the program with a rockier edge on various pieces. It's a surprisingly seamless transition from the more polite 60's pop criteria into the modern age. Here, Argent—always one of the finer rock keyboardists—enjoys ample soloing room where he bridges jazz voicings with the pop-rock element.

The band closes out the set with a breezy and understated spin on the pop and jazz standard, "Summertime." Here, Blunstone's use of tremolo techniques and whispery lyricism cast a subtle and somewhat ethereal tone that nicely offsets the bulk of the program. And Argent's daintily fabricated electric piano solo rides atop drummer Steve Rodford's soft brushes to round out a subliminally haunting approach to this classic ballad. Finalizing the set with a low-key portraiture, the group conjures a melancholic aura that nicely contrasts the enlivening program, where Argent and guitarist Tom Toomey scatter dabs of grit into the band's pop-based constitution.

Note: The companion DVD features the concert plus interviews with Colin Blunstone and Rod Argent.