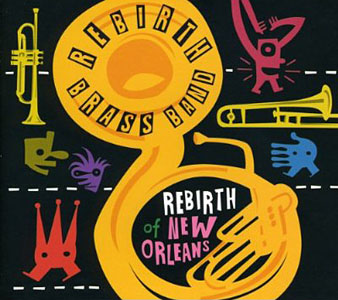 Largely credited with the revival of brass bands in New Orleans, Rebirth Brass Band continues its tradition of bringing high spirited music to its band of loyal followers. Rebirth of New Orleans is a fast-paced, funked up horn party with a contagious beat that makes it difficult to sit still. Formed in 1983 by two brothers, tubaist Phil Frazier and bass drummer Keith Frazier, along with the beloved trumpeter Kermit Ruffins, Rebirth has been New Orleans' go-to party band, its regular Tuesday night gig at the Maple Leaf Bar keeping Oak Street awake until the wee hours of the morning, with loyal fans dancing out into the street. These fans will not be disappointed in this funk-fueled CD, with the Frazier's keeping the bands unmistakable beat along with snare drummer Derrick Tabb.

The CD starts off with an almost sweet version of the traditional "Exactly Like You," but moves quickly into the more-than-suggestive "I Like It Like That," with Rebirth's horns blazing. The set's energy does not stop, and is very reminiscent of the band's live shows, where fans dance non-stop and the night usually ends with a crowd onstage dancing with the band. This is difficult to reproduce on a recording, but Rebirth's new record company, Basin Street Records, and its producers have managed to captured its sound and energy on this fine studio recording. Even as the band goes into its loose frenzy on "AP Touro," written by Troy "Trombone Shorty" Andrews, each horn can be clearly heard, as well as the drums and tuba keeping the fast-paced rhythm.

"Do It Again," a tribute to the band's beloved football team, the New Orleans Saints, and "Shrimp and Gumbo," which exults the city's most notable dish, are played and sung in an energetic call-and-response style. The CD ends with a funked up version of the traditional Mardi Gras Indian tune "Let's Go Get 'Em," with Chief Black Feather "Lionel Delpit" taking on the vocals. It was genius to bring Rebirth and the Chief together, and makes for an exciting ending to a non-stop, one-hour dance party. A word to those whose feet are hurting from dancing to this CD—use the breaks between tunes to rehydrate; Rebirth is aerobic.

Exactly Like You; I Like It Like That; You Know You Know; The Dilemma; AP Touro; What Goes Around Comes Around; Do It Again; Why Your Feet Hurt; Shrimp and Gumbo; Feelin' Free; Let's Go Get 'Em.