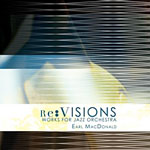 The big band era ended long ago, but the world is a better place because people like pianist Earl MacDonald still yearn to keep it alive in some way. MacDonald—a composer, arranger, pianist and Director of jazz studies at the University of Connecticut—is probably best known for his work in jazz education and his time spent with Maynard Ferguson, serving as musical director, pianist and arranger for the trumpet titan. Despite his considerable skills behind the piano, it's his composing and arranging chops that will raise eyebrows here.

MacDonald immediately establishes his group as a force to be reckoned with— delivering the short and punchy "Friday Night At The Cadillac Club." MacDonald's writing here is a marriage of Gordon Goodwin's feisty charts and a Count Basie-worthy rhythm section, with drummer Jordan Perlson acting as the engine that powers this locomotive. At some points, MacDonald uses the power of this potent horn section to push the music forward, while other moments allow the trumpets, trombones and saxophones to pass riffs to one another in some exciting, brisk exchanges. Guitarist Pete McCann adds some left-of-center solo ideas and his cutting tone adds a different sound to the more traditional elements within this big band.

While the opener is a short burst of energy, the remainder of the album explores a wide variety of musical ideas, colors and textures. Some slippery soprano saxophone work from Tim Ries and more slicing guitar lines from McCann prove to be the highlights on "Measuring Up." Following some dark cymbal rolls here, Jordan Perlson moves to a drum-n-bass style groove and the character of this piece, like so many others on the album, continues to evolve and develop right through to the unsettling chord at the end. "Bad Dream" begins with some tasty, swinging lines—think of an updated version of Basie's "New Testament" band—but it eventually descends into a disturbing nightmare, as implied by the title. The collage-like nature here—fusing chaos with classy vignettes—is reminiscent of some of Carl Stalling's cartoon music and the playful attitude helps make this piece so appealing.

A spicy, salsa take on Dizzy Gillespie's "Woody 'N You" gives trumpeter Joe Magnarelli, tenor saxophonist Ralph Bowen and McCann a chance to unleash some expressive and jubilant solo work. MacDonald wrote "Jana's Song" as a gift to his wife on their wedding day. Trombonist Mark Patterson's inviting sound and Ries' elegant alto work leisurely move over this waltz as the light woodwind textures and warm brass set the mood. Overlapping woodwind lines, with a welcome bass clarinet presence from Steve Kenyon, and mellow flute work help to lend a gentler sound to certain sections of this piece. While this big band can swing with the best of them, MacDonald's decision to brand the group as a "jazz orchestra," proves to be telling and apt. Re: Visions goes beyond where most big bands go and the music here establishes Earl MacDonald as a major force in the world of jazz composition.