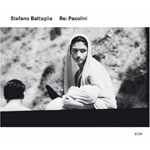 For the follow-up to his 2005 ECM debut, Raccolto, veteran Italian pianist Stefano Battaglia leaves behind its freely improvised context for more structured territory. That shouldn't suggest that Re: Pasolini doesn't have its share of surprises, but with a greater attention to form and arrangement, it provides a contrasting view to Battaglia's broad musical scope.

Re: Pasolini is another double-disc set that also features two different line-ups. Unlike Raccolto, however, there's an overriding conceptual link that goes beyond mere stylistic approach. The multidisciplinary Pier Paolo Pasolini (1922-1975) was a distinguished writer, film director, painter and political figure. Battaglia honors Pasolini's multiplicity of interests through a series of compositions covering a wide range of emotional resonances, from stark beauty to jagged and, sometimes, chaotic disturbance.

Disc one contains generally longer pieces for an ensemble, which at times expands to a sextet featuring trumpet, clarinet, cello, bass and drums. The beauty of "Canzone di Laura Betti is underscored by a deep melancholy that reflects Pasolini's paradoxical introspection of grief and vivid personal strength. The classicism that imbued Raccolto remains the foundation for Battaglia's writing and the ensemble's approach. The soft elegance of "Canto Popolare, beginning as a duet between Battaglia and bassist Salvatore Maiore, fleshes out to a trio with the entry of Roberto Dani's delicate brushwork, the song evolving towards a greater optimism that still retains a hint of the bittersweet.

In contrast to the first disc's unequivocal lyricism, disc two is a considerably more abstract affair. Featuring a quintet that brings together violinist Dominic Pifarély, cellist Vincent Courtois and bassist Bruno Chevillon—three names that will be familiar to follower's of clarinetist/saxophonist Louis Sclavis' growing ECM discography—the shorter pieces also reference a classical approach, even as collective improvisation is more dominant. But if disc one's classicism is of the romantic/impressionist variety, then disc two leans towards contemporary composition and an overall darker, more abstruse complexion.

Battaglia builds the drama of the solo "Meditazione Orale from an initially spare motif, an almost minimal approach that nevertheless becomes more powerful with each passing moment. Eight "Lyra miniatures are scattered across the disc using equally economical concepts but with the involvement of various members of the quintet, are at times brooding and introspective, elsewhere dynamic and expressionistic. Even the longer "Mimesis, Divina Mimesis is an obscure piece where Battaglia's ruminations at the lower end of the piano work hand-in-glove with percussionist Michele Rabia's equally disjointed colorations.

Only the closing track "Pasolini, with its rubato intro and haunting theme, ultimately brings things full circle with the more defined pulse and melodicism of disc one. The result is a narrative song cycle that explores a range of philosophies and feelings. Re: Pasolini is a most fitting tribute to one of Italy's more controversial figures by one of Italy's more ambitious and stylistically far-reaching pianists.