Rufus Harley: Re-Creation of the Gods

By Hrayr Attarian
July 8, 2006
Sign in to view read count 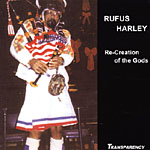 The mere mention of jazz played on bagpipes is guaranteed to get a look of disbelief from most people, but not from listeners who have heard Rufus Harley, especially Re-Creation of the Gods, a 1972 disc that many consider his best. The Transparency label has reissued this record on CD with four extra tracks and pristine digital remastering of the sound.

Rufus Harley, one of the only bagpipe-playing jazz musicians in the history of jazz, is a virtuoso on the instrument, coaxing improvised riff after riff from it. In his hands it sounds like two reed instruments played at once. This very enjoyable and often surprising music is in the soul-jazz vein, with a touch of Eastern sounds, and the combination of organ, bagpipe, percussion and sometimes electric bass works very well. The playing can easily be termed spiritual.

Re-Creation of the Gods is reminiscent of Rahsaan Roland Kirk's later work—eg. Blacknuss, with its mixture of spirituality and soul—and Rufus Harley's bagpipe sounds somewhat similar to the manzella and stritch played by Kirk. Bill Mason's organ is an excellent complement to Rufus Harley's bagpipe and sax. The combination hints at the organ/tenor combos of the late '60s and early '70s.

Although the leader and Bill Mason stand out with their solos, the tight drumming and solid electric bass anchor the music within the soul-jazz tradition and add an earthy quality to the recording. The only track which seems out of place is the 23-second intro (one of the extra tracks), which seems to be from a live show by Rufus Harley's quintet. The rest of tracks do not appear to have been recorded live, nor are they made by a quintet (rather a trio or a quartet).

The liner notes provide short essays on spirituality and quotes from a variety of Eastern religious texts, which fit well with the mood of the music but do not give any further details about the recording. The remainder of the bonus tracks, however, have the same lineup of musicians and are in the same musical vein as the original tracks, so they are likely taken from the same recording session.

The similarity in the musical quality and style does not mean that these tracks are repetitive or indistiguinshable from each other—or formulaic in any way. On the contrary, each one is unique and full of surprises. They are like poems in a poetry jam session; each is unique on its own, but also an inalienable part of the whole.

The few other Rufus Harley tracks that I have heard (from his Atlantic years) seem like prototypes for this record. The ideas are there, but they are not as accomplished or fully realized as the ones on this recording—thus, while they're interesting, they're not as rewarding to listen to as this disc.

Bagpipes and jazz make an unusual combination, but this is a very creative, enjoyable and refreshing soul-jazz record that, while not necessarily groundbreaking, is very rewarding to listen to many times over.

Intro; The Crack; Re-Creation of the Gods; Nobody Knows the Trouble Us People Done Seen; This Little Light of Mine; Hypothesis; Gods and Godesses; Etymology.