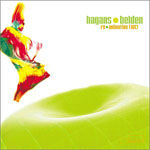 Given the technical considerations, I didn’t expect that trumpeter Tim Hagans and saxophonist Bob Belden would be able to translate their groundbreaking 1999 project, Animation/Imagination (Blue Note), to the live stage, but they proved me wrong in astonishing fashion. This new disc documents the band’s performance at the Montreal Jazz Festival with Hagans on trumpet, Belden soprano sax, Scott Kinsey keyboards and samples, David Dyson bass, Billy Kilson drums, and DJ Kingsize on the turntables.

This project seems to work better on many levels than similar attempts to assimilate techno and jungle elements into jazz. Hagans and Belden chose the ideal meeting point for the two disparate styles: the funk-fusion aesthetic of Miles Davis in the '70s. The results are fresh, enervated and crackling with power. Like many of Miles’ electric albums the tracks here segue seamlessly into one another, keeping the momentum alive.

Kilson is an especially strong asset as illustrated by performances like "Hud Doyle" and "Dans la Ville." Hagans is a brooding Dark Magus, and Belden bristles with fiery ideas. If this isn’tthefuture of jazz, at the very least it’s an exciting glimpse into an alternate universe of sound possibilities.