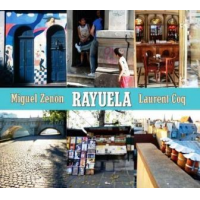 Inspired by Julio Cortáza's sweeping and influential novel, Rayuela (Pantheon, 1963), pianist Laurent Coq and saxophonist Miguel Zenón transform parts of the Argentinean writer's famous work into a memorable jazz release. Written in Spanish, and published in 1963, the title literally means "Hopscotch." The text has been described as an "introspective stream-of-consciousness" and a "masterpiece of ingenuity and originality," with an astounding 155 chapters that can be read linearly, or without chronological order, leading to multiple thought-provoking conclusions.

Likewise, the project is fascinating as it envisions varied characters and episodes from the novel into ten compositions steeped in detailed imagery. Zenón describes the project as a "French-Latin American" connection, with the book's narrative taking place in both Paris and Buenos Aires, and juxtaposed against the musician's backgrounds: Coq was born in Marseille, France and Zenón's birthplace is Puerto Rico. The project draws upon Cortáza's stories where relationships, philosophy, politics, spirituality and music are intricately woven.

In addition to Coq and Zenón's fervent ideas, are stellar performances from an ensemble that includes Dana Leong, alternating instrument duties between cello and trombone, and Dan Weiss' consummate rhythms on drums, tabla, and percussion. Together, the bass-less quartet creates an expansive portrait that imbues the disciplines and freedoms of diverse music. Avant-gardism, modern classical elements and stirring improvisations, as witnessed in Leong's explosive cello solo in "La Muerte de Rocamadour" (The death of Rocamadour), highlights a chapter centered on the death of protagonist La Maga's infant son. Complex syncopations spotlight Weiss' jaw-dropping playing on "Morelliana"—a multifaceted chapter reference to "Morelli," a ghost character, frequently mentioned in conversations throughout the novel.

Thankfully, the literary complexities do not detract from appreciating and enjoying the music. There are rapturous moments such as "Talita's" bohemian quality, as the instruments navigate rhapsodic channels. Or, the brightness of "Oliveira," filled with Coq and Zenon's playful exuberance. Coq is wonderful pianist and writer, and he brings the intriguing character, named "Traveler," to life with Leong's stunning, circuitous patterns. Zenón's interpretation of the carefree lifestyle in "El Club de la Serpiente"(The Serpent Club), is a nod to Cortáza's appreciation of jazz artists such as saxophonist Charlie Parker. Multilayered, profound and cerebral, Rayuela is an outstanding work. It is also evidence of what can happen when masterful artists think outside of the box and even outside of a literary masterpiece.