Ray Passman: Down The Publisher's Way

The greatest melody writer was Jerome Kern. That's not to demean Gershwin and Harold Arlen - they looked up to him.

New York lyricist and music publisher Ray Passman describes his publishing company, Raybird Music, as providing "jazz for the world." Passman began in music in the late '40s in New York, and he has written songs with such history, making writers including Sunny Skylar (who wrote the English lyrics to "Besame Mucho"), Johnny Carisi ("Israel"), Bert Russell and Phil Medley (their "Twist And Shout" helped propel The Beatles to the top), and Bob Dorough. Given also that he has a publishing company, Passman has indeed a strong platform to send jazz to the world.

It was Passman who wrote the lyrics to Sonny Rollins' best known piece "St Thomas" in the mid-'60s (there have been many recordings of the version with lyrics, which Passman atmospherically entitled "Down St Thomas Way"). Earlier in his career, he had been attracted by the instrumental tunes on Miles Davis' Birth of The Cool (Blue Note, 1949). He wrote lyrics for two of the most famous original tracks on the album, "Boplicity" and "Israel." He says the original music writer of the latter, Johnny Carisi, named the original tune "Israel" because his wife was from Israel and that country had just become a state at the time, in 1948). With Passman's lyrics, "Boplicity" became "Bebop Lives," and "Israel" became "It's Your Dance."

Life as a lyricist began for Passman, when he was working for a music publisher with another successful writer and music figure, the well-known Herb Wasserman. Passman had heard an old children's tune, and thought he could put words to it. He mentioned it to co-worker Wasserman in their office, and the latter thought it a good idea to try the project. The song became "Anything You Wanna Do I Wanna Do With You," later recorded by such famous vocalists as Billy Eckstine and Anthony Newley.

And Passman's instinct for matching a catchy title to a catchy tune did not desert him; another classic was soon created, "Don't Promise Me," otherwise known as "The Can Can Song," after he wrote lyrics to the famous melody by composer Offenbach.

When asked if he believed, as some lyricists do (such as former Barry Manilow lyricist Marty Panzer who is, unlike Passman, a "lyrics-first man"), that the lines should always rhyme perfectly, Passman replied that there is no rule as such: "It is what it is," which suggests a definitive "no."

He didn't want to suggest any particular authors to read that might give inspiration. Writing words is clearly an organic process for Passman, where he is attracted by a tune and then the words happen. That is, after all, what Ira Gershwin did; he listened to his brother George's tune and than wrote appropriate words.

Music publishing is also, of course, a major part of Passman's world. A basic lesson in copyright arises with his re-telling of the Rollins "St Thomas" lyrics story. He and Wasserman went round to see Sonny Rollins, to ask him if he would mind if they added lyrics to the Caribbean-style melody that Rollins had recorded as the opening track to his mega album Saxophone Colossus (Prestige, 1956). Rollins said that was okay. So the lyrics were finished and, in time, many cover versions were successfully recorded by various artists. Then twelve years later, in 1977, Passman happened to read an interview with Rollins where the latter said that "St Thomas" was a tune his mother had sung to him—when he was a child—in other words, Rollins did not write it.

This meant that Passman and Wasserman could have had a bigger share of the writers' royalties—in fact, all the royalties—from the sales and public performances from the successful with-lyrics recordings (not, of course, from sales of the instrumental version), as the tune itself was firmly in the public domain. Legally speaking, Rollins' share of royalties from the sung versions actually belonged to the lyricists, Passman and Wasserman.

Passman says, of course, that jazz sales account for only a small total percentage of music sales in the United States (1%), but an interesting point is that in Japan jazz accounts for a significant 5% of all music sales. And it is worth noting that publishing revenue from ringtones has become a small but increasing factor in the music business revenue for writers.

The well-known Harry Fox agency is the main collector of mechanical royalties—royalties from the sale of CDs, ringtones or downloads—so far as publishers in the US are concerned, but for worldwide reach Passman, as a publisher, relies on Universal to collect his royalties. His firm also collects royalties on behalf of individual artists' publishing companies.

One of Passman's major activities now is seeking out new jazz singers. Over the last decade he has, for example, uncovered award-winning vocalist Diane Hubka, co-producing her first album—Haven't We Met? (Self Produced, 1999), which was nominated for a 1999 Jazz Award for best recording debut of the year. Hubka later recorded You Inspire Me (Self Produced, 2002), with a group of famous guitarists including Bucky Pizzarelli, Gene Bertoncini, Paul Bollenback and John Hart. Passman has also assisted singers Ann Carlini and Jane Irving. Irving is an Australian-based singer and scat vocalist whose Beams (From The Top Entertainment, 2007), has received impressive reviews around the world.

When asked if he would name his favorite melody writers, at first Passman replied "All of them." On reflection, however, he nominated Jerome Kern as his favorite tune composer. He continued, "The greatest melody writer was Jerome Kern. That's not to demean Gershwin and Harold Arlen—they looked up to him. They all loved Jerome Kern." As if by design, the opening notes of Kern's "Long Ago and Far Away" drifted from the bandstand of the restaurant: "There you are!" said Passman.

That is the third songwriters' vote for Kern as best melodist that this writer has collected, having asked the same question of legendary poet/songwriter Rod McKuen ("Seasons In The Sun," and the sole writer of A Man Alone (Reprise, 1969) for Frank Sinatra); his vote for best melody writer was also Kern. 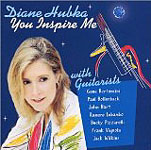 Both Passman and Dorough collaborated on lyrics for Dizzy Gillespie's "Woody 'N You," which became, with lyrics, "Wouldn't You?" Passman has even written a song entitled "Frishberg and Dorough," co-written with and recorded by singer Meredith d'Ambrosio.

Passman ended by revealing his suggestion of what life is about. He said, "Life is about avoiding traps." Referring presciently to the now increased awareness of the psychological effect of nurture (as opposed to nature) on an individual, he added that "parents may not have their act together."

Another way to put it might be to say that knowledge, whether communicated by parents or from another source, is king. It therefore appears unlikely that Passman will be allowing any more public domain royalty payments—to Rollins, or anyone else—to dilute his copyrights!