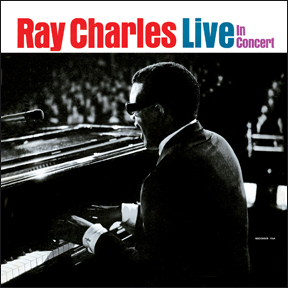 Charles released few commercial live recordings in the 1950s and '60s, when his considerable talent and influence were being most potently felt in American music. Ray Charles at Newport (Atlantic) was release in 1959, recorded the year before. A year later, Charles released Ray Charles in Person (Atlantic, 1960), a live concert captured in May 1959, at Morris Brown College. These two recordings were combined and rereleased as the well-known Ray Charles Live (Atlantic, 1987), and are the live testaments to Charles' stay with Atlantic Records.

Charles moved to ABC Records in November 1959 when his contract with Atlantic concluded. He immediately released The Genius Hits the Road (ABC-Paramount, 1960) and the single "Georgia on my Mind," launching him into super-stardom. Live in Concert was released in 1965, as a 12-selection LP, well-representing his ABC catalog of the time. This CD reissue adds nine songs to the original release, spotlighting Charles's game changing Modern Sounds in Country and Western Music (ABC-Paramount, 1962).

While remaining a compelling performer well into his long career, Charles was never more essential than on this live recording. He had not grown bored with his material yet, and he played and sang with all to the playful soul and sensuality he had brought to the music 15 years before. He introduces and sings "I Got A Woman" (1955) like it was recorded the previous day, respecting the song the for what it provided him—and us (The The Rolling Stones should be so graceful). He plays organ on "Georgia on my Mind," infusing more soul than thought possible into the Carmichael/Gorrell classic.

Of the previously unreleased material (besides "Georgia") "That Luck Old Sun," "Busted" and "My Baby (I Love Her, Yes I Do)" make the greatest additions to the original release. Charles fronts a big band, the format he used with such success a few years earlier on Genius + Soul = Jazz! (reissued Concord, 2010). He has both alto saxophonist Hank Crawford and tenor saxophonist David "Fathead" Newman in the horn section, giving a touch of the older days. This is prime genius in his prime. The finest testament of the power Ray Charles wielded live in concert.

Opening; Swing A Little Taste; One Mint Julep; I Gotta Woman; Georgia On My Mind; Margie; You Don't Know Me; Hide Nor Hair; That Lucky Old Sun; Baby, Don't You Cry; In The Evening (When The Sun Goes Down); Hallelujah I Love Her So; Making Whoopee; Busted; Don't Set Me Free; Two Ton Tessie; My Baby; What'd I Say; Finale.